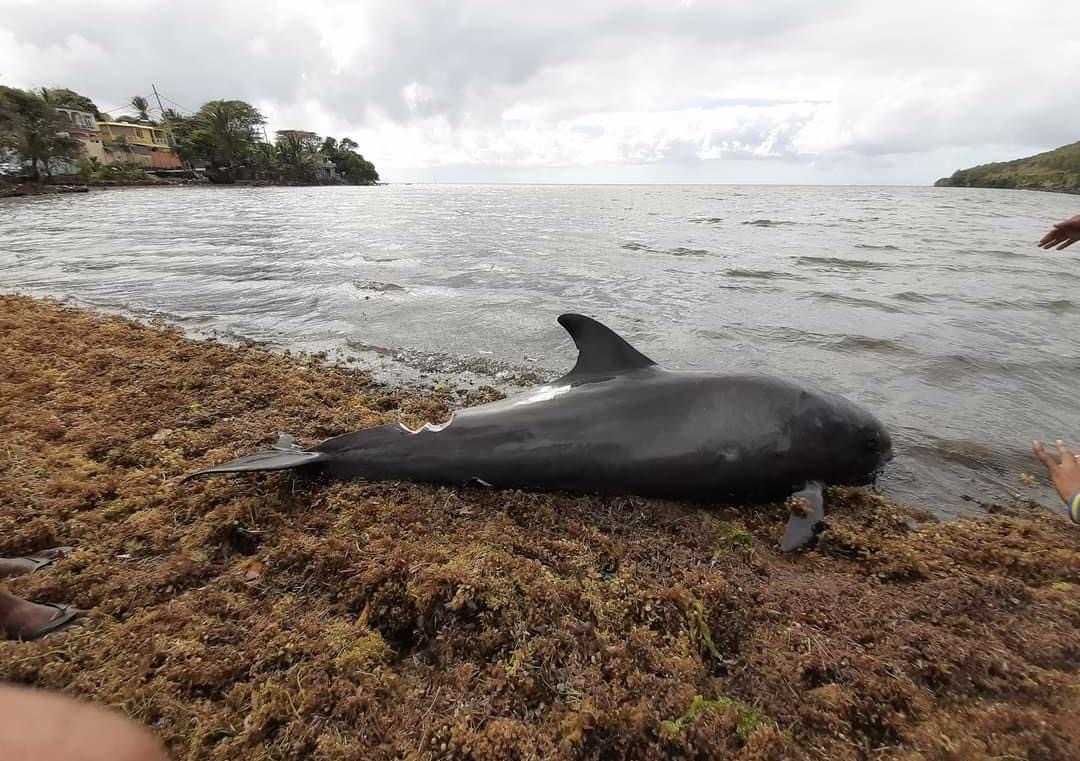 Thousands of people demonstrated in Mauritius on Aug. 29 over the government’s handling of a recent ship grounding that spilled 1,000 tons oil in the seas around the island nation. In what appears to be the latest toll in the incident, dolphins and whales have beached close to where the M.V. Wakashio freighter ran aground and broke up.

Thirty-nine of the mammals have beached in the week to Aug. 28. Social media is awash with photos of the stranded animals, including mothers and calves.

At a press conference Sudheer Maudhoo, the Mauritian fisheries, marine resources and shipping minister, called the beachings a “sad coincidence.” Though a link between the deaths and oil contamination has yet to be established, disaffection has swelled in the aftermath of the spill, with protesters taking to the streets of the capital, Port Louis, and wielding an inflatable dolphin with “Inaction” written on it.

The Wakashio struck the coral reef barrier off the country’s southeastern coast on July 25; the damage to its fuel tankers led to a leak on Aug. 6. The fact that the ship lay lodged in the coral reef for more than 10 days before any decisive action by the government has become a sour point for Mauritians demanding answers from the authorities.

“The oil spill became like a culmination of growing frustration in the country. Since we have this new government, there were a series of issues and the Wakashio oil spill was the last straw,” said Mokshanand Sunil Dowarkasing, a former member of parliament who now works with Greenpeace in Mauritius.

The vessel lay stranded in the vicinity of at least three sites of ecological significance: Blue Bay Marine Area; Pointe d’Esny, the largest remaining wetland in Mauritius; and the coral isle of Ile aux Aigrettes, which is a nature reserve. Facing mounting pressure from abroad and within the country, the government hastened efforts to pump out the oil that remained on board, even as a ship was at the brink of breaking apart. On Aug. 15, it broke into two, but by then most of the oil on board had been removed.

The situation, however, has only grown murkier since. Left with a broken ship on its hands Mauritian authorities decided to scuttle its front half. The move drew sharp criticism from conservationists and even the French government, which is aiding in de-pollution efforts. The appearance of the dying marine mammals soon after the ship’s bow was towed out and sunk at a depth of 3,100 meters (10,200 feet) on Aug. 24, has fuelled concerns.

The dolphin and whale deaths have touched a nerve in a nation which takes immense pride in its vibrant marine life. Mauritian territorial waters cover an expanse of more than 16,800 square kilometers (6,500 square miles) and host at least 1,700 marine species. The southwest Indian Ocean where Mauritius is located is visited by more than 20 species of cetaceans, the order to which whales and dolphins belong. Encounters with dolphins and whale-watching are huge attractions for tourists.

Most the stranded mammals are melon-headed whales (Peponocephala electra), which belong to the dolphin family. A preliminary examination of several individuals by a government-run research center found injuries to a few but no traces of hydrocarbons.

“We can’t rule out the Wakashio completely,” said Jacqueline Sauzier, who heads the Mauritius Marine Conservation Society. “We can rule out the part which is close to shore but not the one that has been sunk.” She suggested that if the beachings were linked to the ship was it was likely a result of the mechanical process of sinking the bow rather than the spread of contaminants.

Dowarkasing at Greenpeace echoed the view that one plausible cause for the cetaceans’ plight was the sinking of the ship’s bow.

Melon-headed whales are open-ocean species whose presence in the lagoon is a sign of concern. Both whales and dolphins rely on echolocation to map and navigate around their surroundings. Unusual noises that interfere with their sonar can trigger strandings. Mauritius has seen stranding events before, when marine mammals have become disoriented and strayed into the lagoon.

“The stranding situation is not exceptional in the sense that this dolphin species is very sensitive to noise pollution and several cases of stranding with this cause have already been reported in the area,” said Jean-Marc Gancille from Globice, an NGO based in the nearby island of La Réunion that studies cetaceans and is helping the investigation into the dolphin and whale deaths.

It could take days before results from all the necropsies will be available, but the deaths have already galvanized public anger.

Conservationists have been warning for weeks that the oil spill will have long-term impacts on the marine ecosystem, especially on coral reefs and coastal mangroves. “For us, the mangrove area, the lagoon with the coral reef, the seagrass and the impact on the sand bed are all matters of concern,” Sauzier said.

The deaths have sparked fears about the fate of other species as well. Both hawksbill and green turtles nest on Mauritian beaches, and the nesting season is two months away. It is unclear what will happen to the ship’s stern, its rear half, which is still on the coral barrier. If the structure disintegrates on the coral reef, it could do more damage.

Volunteers from the public were at the forefront of the cleanup operations as oil began clogging the coast last month. Mauritius won international praise as reports emerged of communities coming together to create homemade booms from human hair and straw to mop up the oil, and of volunteers organizing to clean up the coast.

De-pollution experts have now taken the lead in the operation, and while volunteer efforts have largely taken a back seat, some local volunteers continue to be involved. NGOs like Eco Sud, an Australia-headquartered nonprofit that works in Blue Bay, close to where the ship ran aground, says the consultation and decision-making process has not been transparent.

The cause of the grounding is still being investigated. The government has set up an online portal to allow affected people to file claims and is distributing supplies and relief to affected fishing communities. Another protest is planned for Sept. 12 in Mahebourg on the southeastern coast, which was heavily impacted by the spill.

Malavika Vyawahare is a staff writer for Mongabay. Find her on Twitter: @MalavikaVy

FEEDBACK: Use this form to send a message to the author of this post. If you want to post a public comment, you can do that at the bottom of the page.