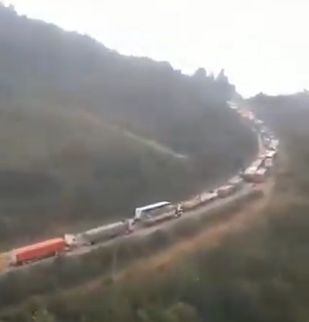 Since Monday, a movement of strikes and blockades of main roads by workers and peasants has been spreading in Bolivia. Protesters are opposing a decree that further postpones general elections, threatening to maintain the de facto government of Jeanine Áñez indefinitely in power.

This week’s actions are a continuation of massive demonstrations that took place last week, on July 28, shortly after the Supreme Electoral Court (TSE) announced the cancellation of the elections scheduled for September. Amidst a protest in El Alto, a traditionally militant working class section of the capital city of La Paz, the Bolivian Workers’ Central (COB) called a general strike and blockades on August 3 if the court did not back down.

Everything has stopped in #Bolivia!
More than 75 highways and roads have been blocked across the country.
Social movements and trade unions stress that their demand is no longer just democratic elections, but also the immediate removal of the entire coup-installed government. pic.twitter.com/vLYBSPSz5p

According to the COB, blockades were erected at 75 locations in the country on Monday, including strategic points in the Santa Cruz, La Paz, Cochabamba, Potosí, Oruro and Sucre regions. Marches by miners, peasants, Indigenous people and poor urban workers took place.

In Potosí and El Alto, police forces clashed with demonstrators, throwing gas bombs and arresting people. In La Paz, a number of young people who were on hunger strike in front of the TSE were arrested and taken into custody by two police buses.

The anger of Bolivian workers and peasants against the coup regime has grown substantially in the course of the COVID-19 pandemic. The devastation of the virus is intersecting with the substantial increase in poverty in the country.

Unemployment has exploded in Bolivia, rising from 4.8 percent at the end of 2019 to 8.1 percent in May in urban areas. The Economic Commission for Latin America and the Caribbean (Cepal) predicts that by the end of the year some 500,000 Bolivians will be driven into extreme poverty and 36 percent of the population will be poor.

Under these conditions, the government has used the prospect of infection by the coronavirus to implement police state measures and postpone the date of the elections three times, while proving absolutely incapable of containing the spread of disease and hunger among Bolivians.

Over the past month, the number of COVID-19 infections has more than doubled, having already exceeded 80,000 confirmed cases. The number of deaths has risen even more sharply. With a record 89 deaths in a single day recorded on Sunday, the total number of deaths tripled in July to over 3,000.

These figures are a gross underestimate of the real situation, as the country has one of the lowest testing rates in the world. The recent explosion in the number of cases is directly associated with the anarchic resumption of economic activity, promoted by the government since June in the interests of the bourgeoisie.

Its most terrible results have been demonstrated in the collapse of the precarious Bolivian health care system. Most hospitals have already been forced to close their doors temporarily after the widespread contamination of their staff. The latest case occurred at the April 9 clinic in La Paz, which declared a state of emergency on Monday after 70 percent of nurses and 60 percent of doctors were found to be possibly ill with COVID-19.

The collapse of the funeral system, which is simultaneously occurring, was graphically expressed in the recent implementation of “portable” crematoria fixed on the back of vehicles that circulate on the streets of Bolivian cities.

In Bolivian prisons, which hold 18,000 people, most of them on a pre-trial basis, the government has already counted more than 150 cases and 40 deaths. Last week, a rebellion broke out simultaneously in four jails in Cochabamba, demanding medical assistance and measures to prevent the transmission of the virus.

The coup regime is terrified that the growing demonstrations will get out of control and threaten to overthrow its power. Its desperate response is to promote an escalation of violence.

Making clear the government’s preparation for military intervention against the protests, the Government Minister Arturo Murillo’s threatened the protesters this Tuesday: “Lift the blockades, or we will lift them ourselves.”

Murillo has been one of the main officials responsible for the government’s fascistic tirades. In recent months, he has attacked the blockades of residents already taking place in the poor district of Cochabamba, K’ara K’ara, as being orchestrated by the “narco-terrorist” Evo Morales.

The conspiratorial accusations of all the opposition as “terrorists,” which justifies the permanent maintenance of Áñez and her allies in power, are growing in direct proportion to the social opposition.

Last week, Defense Minister Fernando López appeared on a television program accusing the massive protests growing in the outskirts of La Paz of being in fact a biological terrorist attack by peasants, supposedly contaminated with COVID-19, against the cities. “It’s not a protest… it is the people of Chapare who have come to El Alto to hack down, they are coming to infect the people of El Alto and La Paz,” he said.

The threat of a brutal repression of the Bolivian masses on the streets cannot be overestimated. The government is preparing even greater violence than that employed by the military in the aftermath of the coup, when at least 23 demonstrators were killed and more than 230 wounded.

In the same way that he abandoned those who were fighting against the coup in the streets last year, Morales is negotiating a deal between the COB and the Movement Towards Socialism (MAS) and the bourgeoisie.

“The meetings between TSE Bolivia and COB should not be just a greeting; dialogue is important to reach consensus on a unilateral decision by the electoral authority with dramatic consequences on the population such as postponing elections again and again,” declared Morales on Twitter at Monday.

The agreement being prepared by Morales with the same forces that promoted the coup will only pave the way for the crushing of the working class and peasant forces.