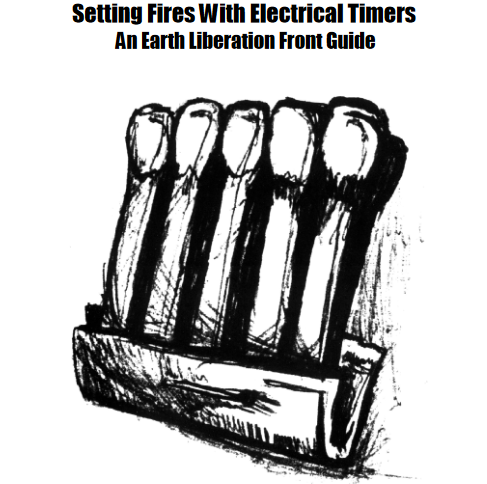 With fire firmly back in the activist’s toolbox after the George Floyd uprising in Minneapolis successfully laid waste to the police precinct involved with George Floyd’s murder, we have seen fire attacks echoing back around the world in solidarity with this fiery revenge. The fire attack on the Portland Police Association last night made us think of this entertaining document from the Earth Liberation Front (ELF) in May 2001. It’s called “Setting Fires With Electrical Timers: An Earth Liberation Front Guide,” and it has a lot of information about the methods used in the ELF arsons which would later become the subject of the Green Scare FBI cases. The 37-page, anonymously authored guide included sections such as “Four Rules of Arson,” “Where to Put Incendiary Devices,” and “Fuel Requirements for Buildings.” The full PDF is embedded below, and the illustrations alone make it worth looking through the whole thing.

Here’s an excerpt, the “Four Rules of Arson”:

1) Most of the heat from a fire rises. Convection currents cause flames and heat to travel upwards. When choosing locations for accelerant, consider the path of rising heat as the accelerant burns. Get as much of that rising heat into the “target area” as possible. The target area is that part of the building or vehicle which is most vulnerable to fire. (For most buildings, the target area is the attic and its rafters, as described in the next section.)

2) The heat needs to be concentrated in one place. It is counterproductive to disperse the accelerant. Contain the accelerant by keeping it in a 5-gallon bucket or other container. Hollywood movies often show people splashing gasoline everywhere before setting a fire. This creates a nice special effect as flames leap up allover the place. However, the heat is dispersed which makes it less likely that solid wood will absorb enough heat (energy) to catch fire and stay on fire.

3) The heat needs to be sustained over a period of time. As an object is exposed to heat, more and more of that energy will be absorbed over time. The temperature of that object will eventually reach the point where combustion (fire) can occur. A momentary flash of intense heat, like a ball of fire, is not as likely to transfer sufficient heat to the object as would a steady flame. For example, you won’t be burned if you move your hand quickly through a candle flame. This is not true if you hold your hand still in the flame. Even very high temperatures can be rendered ineffectual if there isn’t enough time to transfer sufficient heat. This occurs with gasoline which burns hot and fast. Diesel is added to gasoline to slow down the burn rate.

4) Guarantee destruction of the target through careful planning and execution. Take no shortcuts. Do thorough reconnaissance to eliminate surprises. Make contingency plans for anything that could go wrong. Do extensive testing of timers and igniters. Use multiple incendiary devices with generous amounts of accelerant.Never be satisfied with possible destruction or probable destruction. The objective of every action should be assured destruction. The risks are too high for anything else.