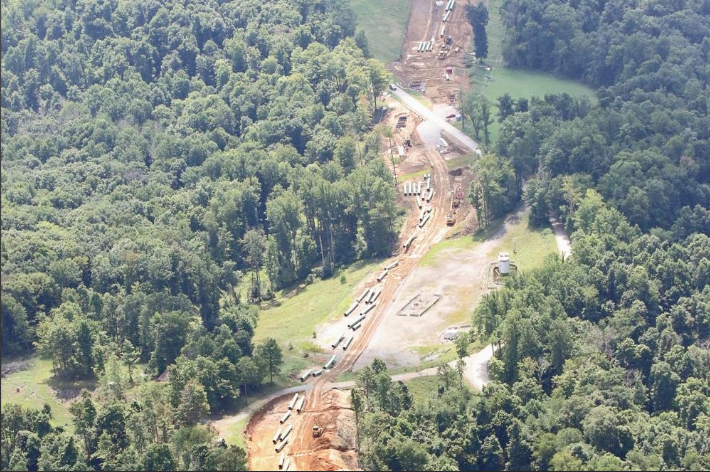 Dominion Energy Inc. and Duke Energy Corp. are canceling the project because of continuing court delays likely to drive the price tag higher. That would threaten the economic viability of the project, they say.

Bound up in the cancellation is Dominion’s decision, announced separately, to sell it gas transmission business to Berkshire Hathaway Energy for $4 billion in cash and the assumption of $5.7 billion in debt.

Charlotte-based Duke (NYSE: DUK) expects to take a charge of $2 billion to $2.5 billion against earnings for its investment to date in the ACP. Duke holds a 47% share of the partnership. That would mean $4.3 billion to $5.3 billion will have been spent on the project, once all the exit costs are calculated.

“This announcement reflects the increasing legal uncertainty that overhangs large-scale energy and industrial infrastructure development in the United States,” say Dominion CEO Tom Farrell and Duke CEO Lynn Good in a joint statement. “Until these issues are resolved, the ability to satisfy the country’s energy needs will be significantly challenged.”

Duke and Dominion specifically cite the April decision by a federal judge in Montana that vacated a key water permit for the controversial Keystone XL pipeline issued by the U.S. Army Corps of Engineers.

Known as a Nationwide Permit 12, the permission to cross water bodies and wetlands was issued under an expedited process also used to permit the ACP. A decision by the 9th Circuit Court of Appeals at the end of May allowing the order to stand until it is heard on the merits threatened to delay the Duke and Dominion project for at least a year.

“The Montana district court decision is also likely to prompt similar challenges in other Circuits related to permits issued under the nationwide program including for ACP,” Duke and Dominion say in their joint press release.

The partners note that appeals court indicated an appeal is not likely to be successful in the Keystone case, creating “new and serious challenges.”

“The potential for a Supreme Court stay of the district court’s injunction would not ultimately change the judicial venue for appeal nor decrease the uncertainty associated with an eventual ruling,” the release says.

The sale of substantially all of Dominion’s Gas Transmission & Storage segment assets to an affiliate of Berkshire Hathaway Inc. (NYSE: BRK.A) was also a major factor in the decision. Farrell says the move is meant to focus the company as utility “pure play.”

“Over the past several years the company has taken a series of steps — including mergers with Questar Corporation and SCANA Corporation, and the divestiture of Blue Racer Midstream and merchant generation assets — to increase materially the state-regulated nature of our profile, enhance the customer experience, strengthen our balance sheet, and improve transparency and predictability,” he says. “This narrowing of focus will also allow us to increase our long-term earnings growth rate guidance by around 30%.”

Dominion will continue to own and operate its natural gas utilities, like Dominion Energy North Carolina, based in Gastonia. It owns such utilities in Virginia, the Carolinas, Ohio and Utah. It will also retain its non-state-regulated utility operations, most notably a 50% passive and unlevered interest in Cove Point — a liquified natural gas, or LNG, facility in Maryland — and the company’s zero-carbon nuclear and solar contracted-generation fleet. It also hangs on to its investments in renewable natural gas.

The sale includes more than 7,700 miles of natural gas storage and transmission pipelines and about 900 billion cubic feet of gas storage that Dominion currently operates.

The cancellation also recognizes the reality that the 4th Circuit Court of Appeals has consistently ruled against the pipeline on every challenge to various permits that have come before it to date.

Duke and Dominion won an important decision just three weeks ago when the U.S. Supreme Court overruled the 4th Circuit on a decision that had blocked a permit to build the project under the Appalachian Trail. But the companies acknowledge the possibility of future court delays.

The day after winning the Supreme Court case, Duke and Dominion filed a petition with the Federal Energy Regulatory Commission to extend the deadline for completing the project. The deadline in FERC’s original certification in 2017 expires in October. Sixteen environmental groups and two private owners filed a challenge to that petition on July 2.

The groups contended the project remains risky and unnecessary. The challengers include the Chesapeake Bay Foundation.

“FERC should firmly reject Atlantic Coast Pipeline’s request for more time to ‘fix’ a project that would inevitably fragment valuable forest lands, pollute streams, and threaten vulnerable communities from the mountains to the Chesapeake Bay,” says Peggy Sanner, executive director of the Virginia chapter of the foundation. “With evidence clearly establishing the lack of demand for energy generated from fossil fuels like natural gas, the proposed pipeline project is a road to nowhere.”

But that battle, which has not yet been joined, does not appear to have been a major factor in the cancellation of the pipeline.

The decision closes the book on a project Dominion, Duke and Piedmont Natural Gas Co. (before it was acquired by Duke) announced in 2014, when it was projected to cost $4.5 billion to $5 billion. Duke has repeatedly promoted the project as a major economic development boost for eastern North Carolina. The company contends manufacturing and other businesses are held back by the lack of access to reliable natural gas supplies.

Duke Carolinas’ power utilities were slated to be the pipeline’s largest customers. With North Carolina served only by the Transco Pipeline in the western part of the state, Duke intended to purchase significant transportation capacity on the pipeline to fuel natural gas power plants it intends to build over the next several years and as an alternative source for gas for existing plants.

Piedmont planned to tap the pipeline to expand its operations in Eastern North Carolina.

The pipeline was designed to run from West Virginia, where it would collect natural gas from the Utica and Marcellus shale deposits to coastal Virginia and then south to Lumberton.

“While we’re disappointed that we’re not able to move forward with ACP, we will continue exploring ways to help our customers and communities, particularly in eastern North Carolina where the need is great,” says Good.

Good meanwhile reaffirms Duke’s plans, first announced in February, to spend $56 billion on capital projects, most of which is targeted at reducing the company’s carbon emissions.

“Achieving this clean energy vision will require all of us working together to develop a plan that is smart, equitable and ensures the reliability and affordability that will spur economic growth in the region,” she says in a prepared statement. “Sustainability and the reduction of carbon emissions are closely tied to our region’s success.”

But some of that money — likely something more than $2 billion — had been earmarked for continued investment in the ACP. Some new investment will have to be made in North Carolina to offset the loss of the proposed pipeline.

More information on what that might mean will come when Duke holds its second-quarter earnings call next month and when it makes state regulatory filings in September, says Duke spokeswoman Tammie McGee.

“We will evaluate multiple options to ensure the needs of North Carolina are met in the near and long term, which could include additional infrastructure to strengthen the eastern part of the state, and natural gas storage and compression investments,” she says. “In September 2020, Duke Energy plans to file its Integrated Resource Plans for the Carolinas after an extensive process of working with the state’s leaders, policymakers, customers and other stakeholders.”

In the meantime, the loss of the pipeline project is expected to have an impact on Duke’s earnings. For 2020, the company expects a 20 cent-per-share hit to its full-year earnings. Duke had announced earnings expectations of $5.25 at the midpoint of its range of $5.05 to $5.45 per share. Duke now projects earnings will be at the low end of that range.

It is also expected to have an impact on 2021 earnings, when it was expected to add 30 to 35 cents to earnings per share.

The impact on Dominion’s earnings are likely to be offset by the gas transmission sale. The debt for spending on the pipeline to date, however, remains with the Dominion parent company and is not part of the debt that will be assumed by Berkshire Hathaway.

The ACP faced opposition from the outset. And its abandonment is clearly a setback for Duke and Dominion. Still, the economic loss is nowhere near as serious, for instance, as abandoning the $25 billion V.C. Summer plant was for the now-defunct SCANA Corp. in South Carolina. That was a “bet the farm” project for the small power company, now a part of Dominion. Duke and Dominion both have market caps of more than $60 billion, allowing them to absorb the impact more easily.

It is still a blow, however.

“We regret that we will be unable to complete the Atlantic Coast Pipeline,” Dominion’s Farrell says. “For almost six years we have worked diligently and invested billions of dollars to complete the project and deliver the much-needed infrastructure to our customers and communities.”