Cross Posted from The Guardian 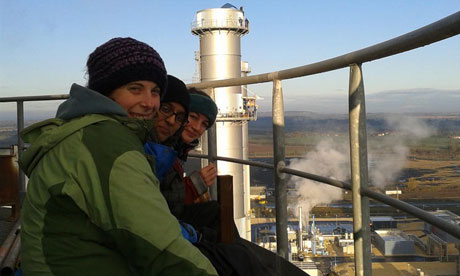 Climate change protesters perched 91m (300ft) up two power station towers have repeated promises to stay for as long as possible, in spite of derisive criticism from the local Labour MP and police estimates that local taxpayers could be hit for £200,000 costs.

The two occupying groups from No Dash for Gas are planning to fly kites in a stiff, chilly breeze from the water cooling towers at West Burton in north Nottinghamshire which has been targeted as one of the UK’s new generation of gas-fired power plants.

The owners and operators EDF have temporarily closed down the £600m generator, which has been undergoing tests before starting supplies to the national grid. Consumers have not been affected and vast plumes of steam continue to pour from the adjacent coal-fired power station built in the late 1960s by the Labour government of Harold Wilson.

The main group of 11 protesters whose base is a tarpaulin-wrapped tent on the central of the plant’s three towers tweeted that more police had come on to the site with loudspeakers to communicate with the group. Campaigners are taking turns to occupy a platform dangling inside the chimney flue, to prevent restarting of operations, while a further six protesters are on the second chimney, which is not yet fully constructed or operational.

Ewa Jasiewicz, one of the activists at the top of the tower, wrote in the Guardian on Monday: “We’re doing this because the gas plant, which is still being constructed by its operator, EDF, is one of the first in a new dash for gas that has to be stopped. The government and the big energy companies want to build as many as 20 new gas power stations, which would leave the UK dependent on this highly polluting and increasingly expensive fuel for decades to come.”

Nottinghamshire police warned that the groups could expect to be arrested, like five women from Leeds and Manchester who were caught on the ground at the plant early on Monday morning when the alarm was sounded. The groups say that they entered through a gap in fencing without causing damage at around 1.20am. Local people were woken by a police helicopter using a searchlight at about 4am.

The protesters took up a wide range of equipment including a solar panel and wind-up generator to make their own power. They also have a portable toilet and food supplies for at least a week – fuelling concern about the protest‘s cost to public funds.

John Mann, the Labour MP for Bassetlaw, twice castigated the group, first as southerners who “should clear off back down south” and then as “city dwellers from Leeds and Manchester” when the origins of most of them were tweeted back from the chimney top. He accused them of driving to the site in carbon-emitting cars and wasting potentially £250,000 “that could have been spent on positive environmental initiatives such as solar panels and ground source heating for pensioner bungalows.”

[youtube http://www.youtube.com/watch?v=qYrhdhLdAOc]
Paul Broadbent, assistant chief constable of Nottinghamshire police,said: “We have no choice but to police the protest, to try and bring it to a successful and swift conclusion and to ensure that everyone’s safety at the power station is protected – including that of the protesters.

“That is already proving a drain on police resources – and if the current staffing levels are maintained day and night for the next week, that will cost in the region of £200,000 – excluding petrol, overtime payments, and other factors.

“Of course people have a legal right to protest – but they must do that lawfully. In trespassing into the power station, scaling chimneys and effectively taking up residency, the demonstrators have acted illegally. There are 101 ways to protest lawfully but breaking into someone else’s property is not one of them.

“I make no comment on the motivation, or cause, of those taking part in the protest. But I do wonder whether the tax payers of Nottinghamshire would want scarce police resources to be occupied in policing this protest.”

A spokeswoman for No Dash for Gas said that the occupying groups were in regular touch with the police and had made it clear that they would hand themselves in when they came down. She said: “We don’t see any need for an expensive police operation. It isn’t as if they are wanting to escape or anything. They have acted responsibly throughout and will carry on that way, giving themselves up when they feel the protest has gone on for long enough.”

Some of the protesters have belayed on to the roof of a nearby building to get an easier position to launch the kite which they hope to use to link the two occupied chimneys. The ingenuity of the operation has attracted quite a lot of local interest and although the chimneys are hard to approach even by public footpaths, the image of protesters crossing two and fro on an overhead line has obvious attractions for a protest designed to draw public attention to climate change issues.

Speaking from the central chimney, one of the group said: “We’re hoping we’ll be able to go too and fro but we’ll have to see how the kite works.” He also added his voice to claims that large-scale policing was not necessary. He said: “We’ve no intention of trying to run away when we come down and we are not going to carry out any criminal damage here whatsoever. They could put a couple of officers at the bottom of each chimney and that would be enough.

“We have not yet decided among ourselves how long we should stay up here, but we are discussing that and we will let the police know as soon as we do.”

A statement from EDF said that security had been increased following the “planned and deliberate act of trespass” and joined police in calling for the occupying groups to come down. The company said that the plant’s Unit 2 which uses the central chimney had been generating 280 megawatts as part of commissioning tests but had been shut down immediately to prevent the protesters coming to any harm. The other two chimneys are not yet operational and production at the next-door coal-fired power station continues as normal.

The company said on the underlying issues: “As part of our sustainability commitments, we aim to reduce the carbon intensity of our generation by 60% by 2020 from a 2006 base. Alongside our new gas plant at West Burton playing a contribution to the country’s balanced energy mix, new nuclear and renewables are major elements in our future generation investment plans. EDF Energy has plans to build up to four new nuclear plants in the UK which could provide low carbon electricity for up to 40% of Britain’s households, We are also the country’s largest generator of low carbon electricity through its existing nuclear and renewables fleet.

“On profits and investment, our earnings before tax, depreciation and amortisation (EBITDA) was £1.6bn last year. Over £1bn was invested in our generation fleet, new generation capacity, gas storage and our customer supply business; and the remaining £600m went to pay our income tax, interest on our debt, the deficit repair payment on our pension schemes and other similar commitments.”

The five women arrested in the plant on Monday on suspicion of aggravated trespass have been released on bail pending further inquiries.