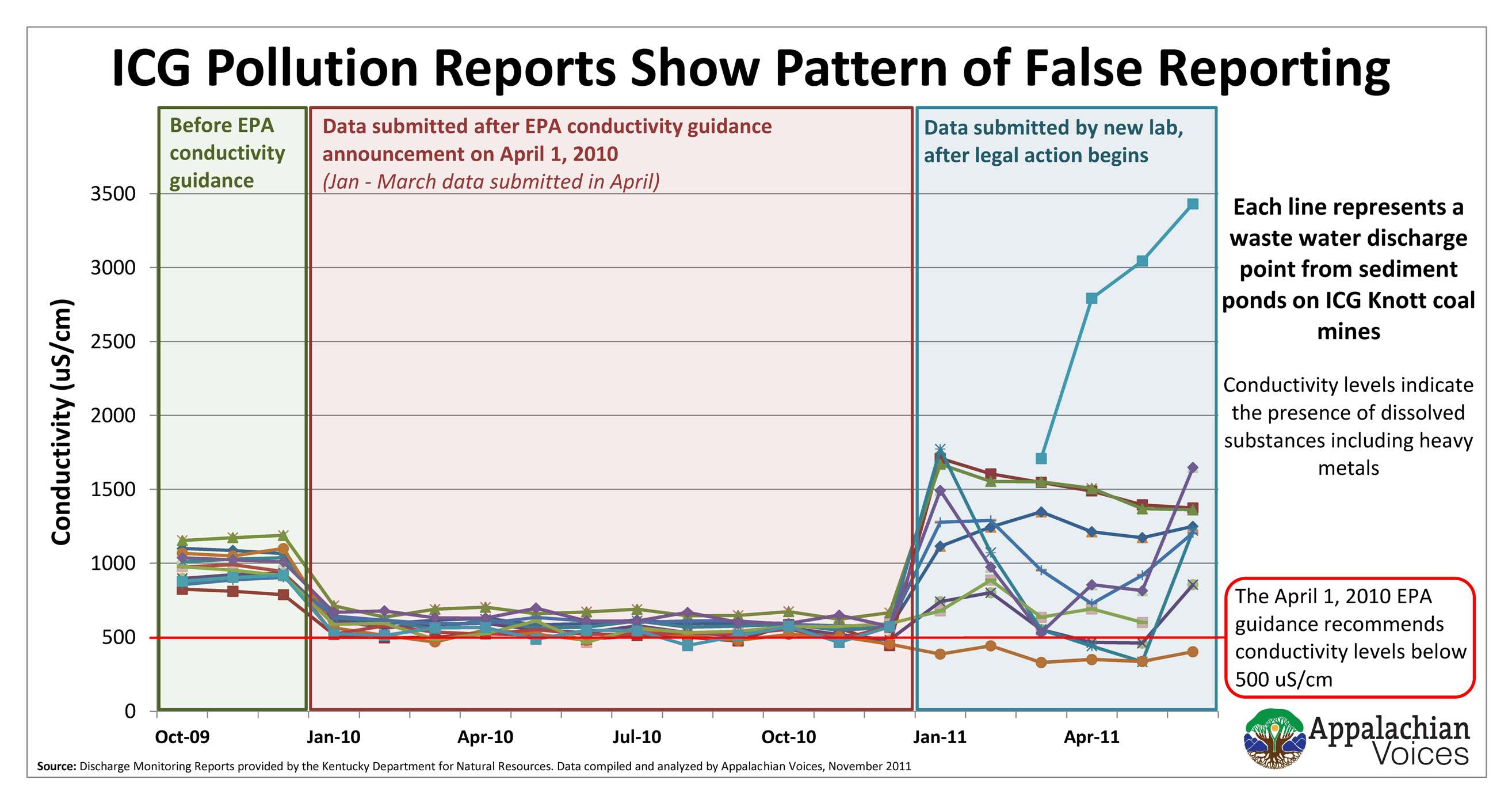 Frankfort, Kentucky – With a goal of restoring water quality and protecting public health from the impacts of coal mining in eastern Kentucky, a coalition of public interest groups and citizens today filed in Franklin County Circuit Court a historic settlement with International Coal Group, Inc. (ICG) and the state Energy and Environment Cabinet over thousands of water pollution violations and years of false reporting by the company and insufficient enforcement by the state.

It is the first time a Kentucky state court has allowed affected citizens or environmental groups to intervene in a Clean Water Act enforcement case brought by the state.

The crux of the settlement, if approved by Judge Phillip Shepherd, is a stipulation for ongoing third-party auditing of ICG’s water pollution monitoring and reporting to ensure the company submits accurate data to the state in the future. The citizens agreed to accept the civil penalties originally assessed by the cabinet against ICG, though only a fraction of the maximum allowed by the Clean Water Act, with the assurance that the money will go directly to fund general water quality improvements and water monitoring programs in eastern Kentucky. The settlement also sets fines for potential future violations. The citizens’ coalition is asking the court to set a date for a hearing on the merits of the agreement, possibly by next week.

“We know that to create a better future for eastern Kentucky, we have to have water that is safe to drink and a more diverse economy,” said Ted Withrow, a member of Kentuckians For The Commonwealth. “This agreement gives us the right, as Kentuckians, to know what’s in our water and to work to restore and maintain its quality.”

In 2010, Appalachian Voices and Waterkeeper Alliance reviewed the cabinet’s own records and discovered false pollution reports amounting to more than 20,000 violations of the Clean Water Act at dozens of coal mines in eastern Kentucky. The mines are owned by Kentucky’s two largest producers of mountaintop removal coal, ICG, and Frasure Creek Mining. (Arch Coal, Inc. purchased ICG in 2010, and Frasure Creek Mining is a subsidiary of India-based Essar Group.)

The groups discovered that for years, the companies each had on numerous occasions evidently cut and pasted the numbers from one pollution discharge report to the next, changing the dates but reporting the exact same monitoring data in consecutive quarters.

“They apparently were not actually doing the required testing,” said Eric Chance, water quality specialist for Appalachian Voices. “And the state, which citizens depend on to protect their health and the environment, failed utterly in its responsibility to catch this industry-wide pattern of misreporting.” When the U.S. Environmental Protection Agency recommended a lower limit for one kind of pollution, the reported levels uniformly and suddenly dropped by half, he said. “There was no change in operations to explain that – the numbers just took a dive.”

The revelation of the false reporting triggered an investigation by state regulators, and the two companies began reporting dramatically higher levels of pollution in their wastewater discharges, sometimes spiking to 20 times the previously reported level with thousands of violations per reporting period. Before the problems were brought to light, the companies had rarely, if ever, reported violations of the discharge limits in their permits.

“The false-reporting epidemic we uncovered in Kentucky can be considered the most far-reaching and egregious noncompliance with the Clean Water Act in the law’s entire 40-year history. It’s astonishing that the cabinet could have been so oblivious,” said Waterkeeper Alliance attorney Peter Harrison.

In response to the coalition’s notice, the Kentucky Energy and Environment Cabinet attempted to quickly reach a settlement with each of the coal companies, but the citizens and environmental groups objected, pointing out the settlements contained no measures to ensure the companies would submit accurate reports in the future, and only assessed a nominal fine of a total of $660,000 for both companies.

Judge Shepherd withheld approval of the settlements, and instead allowed the coalition to intervene in the case. The citizens’ groups have been in negotiations with ICG and the state since January.

Today’s settlement, if approved by the court, would only affect ICG; the citizens coalition has not reached an agreement with Frasure Creek. The court will decide whether or not to enter the originally proposed settlement between the cabinet and Frasure Creek.

“I frequently go paddling and swimming in the Kentucky River, but I am worried about the safety of the water. We have agencies like the cabinet whose job it is to protect us from dangerous pollution. What are we to do when cases like this clearly show that the cabinet is not doing its job. How are we supposed to know that the water we drink, play, and bathe in is safe?” said Pat Banks, Kentucky Riverkeeper.

“The Clean Water Act is premised on credible self-reporting by industry and stringent enforcement by the state. Citizens are given a right to enforce the law themselves when either of those two fail. We discovered systemic failures in both, and were allowed to intervene in order to negotiate a resolution that will better protect eastern Kentucky’s citizens and environment,” said Mary Cromer, staff attorney with Appalachian Citizens’ Law Center.

“This agreement goes well beyond what the cabinet tried to pass off as a ‘prosecution’ nearly two years ago. This is a plan that will actually protect the people of eastern Kentucky by ensuring that the public knows how much pollution these mines are putting in our rivers and streams,” said Harrison.

You can make a donation to support the work of Appalachian Voices in their work to continue to monitor the activities of coal companies and regulators in Kentucky and throughout Appalachia to ensure our waters run pure, our air is clean, our mountains stand tall, and our communities are strong.