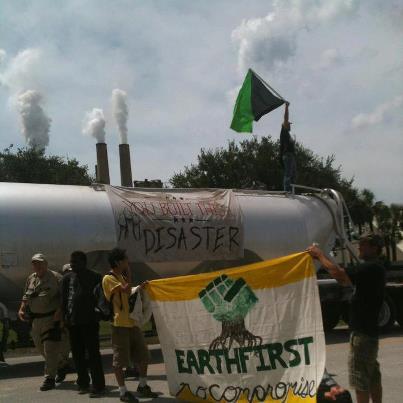 “You Built This Disaster” banner spoofs RNC motto (“We Built this”)

UPDATES: Seven people in total were detained for blocking the roads which stopped all traffic into the coal plant for near four hours. Six were locked down in the road and one was dragged off the top of the truck.

Over one hundred people showed up to support the blockade, many on the buses who traveled down with the Occupy Wall Street contingent from NYC, and dozens of media outlets in town for the RNC reported on the action.

In the end, no one was arrested, as it seemed the police used a strict policy of controlling the perception of protests by avoiding conflict all week.

Regardless, in the end this action not only succeeded in closing access to a massive coal power plant for hours, it also linked the plant’s operations to the corporate-funded political system, and even shut down the Port of Tampa temporarily (as well as freaked out a nearby IKEA who happen to be in the midst of an old-growth logging controversy), just by the threat of our presence!

What follows is a press release from Everglades EF! released at the start of the action:

Apollo Beach, FL—In the climax of the 2012 Republican National Convention, protestors with Earth First! have blocked access roads to TECO’s Big Bend coal plant on the eastern shore of Tampa Bay. The environmental action group is citing corporate influence in politics and ecological impacts of fossil fuel dependency as reasons for the disruption. 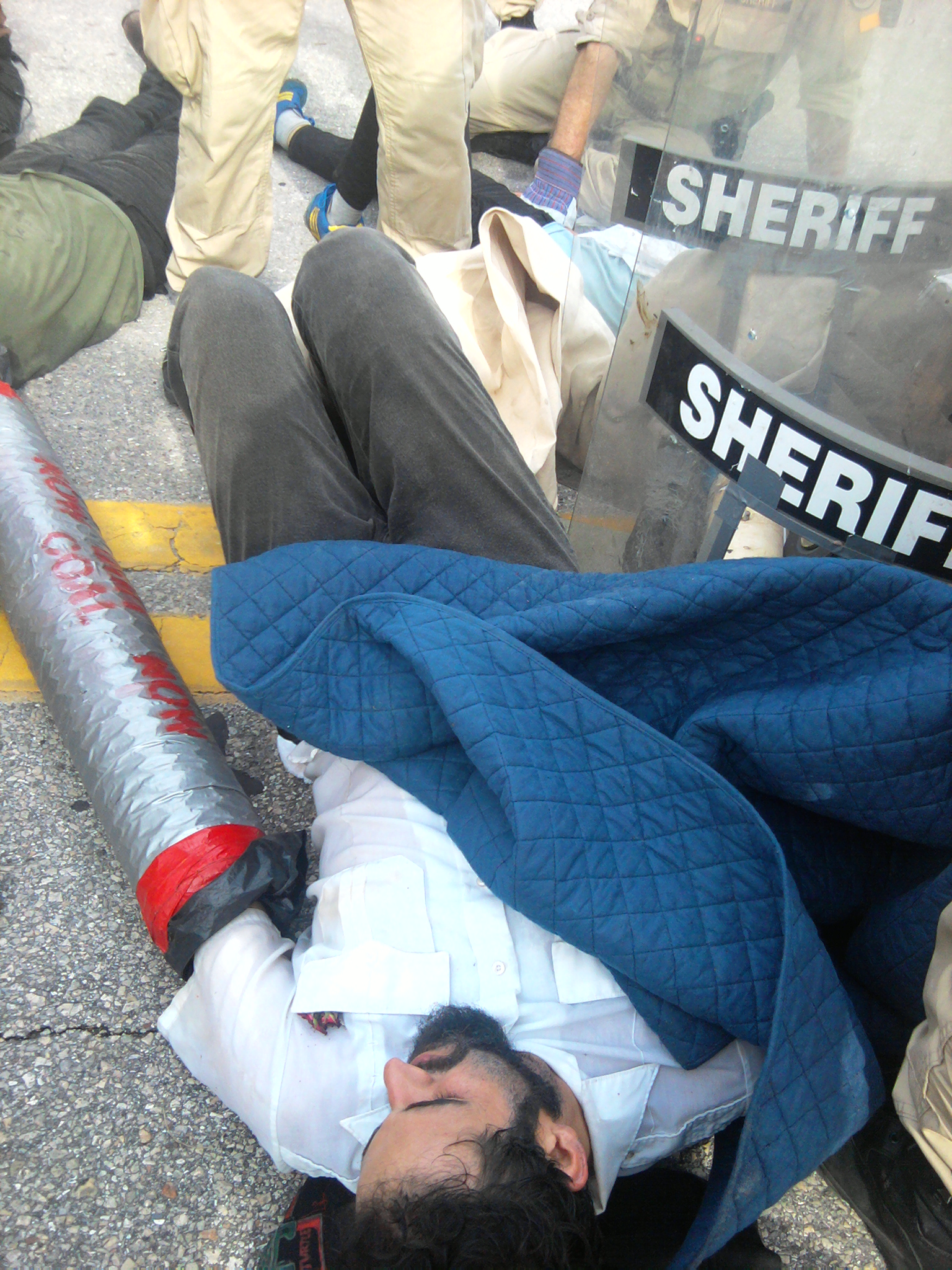 One of two lockdowns along the road, blocking all truck access to the TECO plant

This year’s RNC was funded by an estimated $55 million in corporate pay-offs, with corporations including the Tampa based-TECO Energy, along with Chevron, Duke Energy and Exxon Mobil.

According to a report by Natural Resources Defense Council (NRDC) last year, power plants are the number one polluters in the US and Florida is the third dirtiest state in power plant pollution. NRDC found TECO’s Big Bend plant to be in the state’s top most polluting smoke stacks.

Earth First! activists chose this day for their protest in order to highlight Mitt Romney’s plan to expand what the group calls the “energy empire” which favors the interest of big donors in oil, gas and coal industries.

Romney’s top energy policy advisor is the wealthiest oilman in the country and according to data analyzed by the Center for Responsive Politics, Romney has already raised more from mining interests than Bush or McCain raised from these industries in their entire campaigns.

Locally, TECO’s Big Bend plant has a long history of pollution. In year’s past, it was declared Florida’s number one dirtiest power plant by Florida Consumer Action Network, the plant was documented discharging waste into Cobia Bay in Apollo Beach, and was the first in the state for coal waste.

But that’s not all. TECO has also been called one of the nation’s worst offenders when it comes to mountaintop removal coal mining. In coal mining regions of the Appalachian Mountains, TECO has ruined entire communities to maximize their profits. Kentucky coalfield resident Doug Justice worked in the coal mines for 22 years and said “I have never seen an outfit treat a community the way TECO Coal has done us.”

In response to the devastation from floods caused be TECO’s mining in 2002, Granville Burke of Letcher County, Kentucky, had this to say: “I wish TECO had never started mining above our home. Protection for families like ours is supposed to come from the state and federal regulatory agencies, but instead they look the other way as coal companies destroy entire communities for the sake of profit.”

“Dirty energy becomes dirty politics. We can’t afford to stand by and watch it anymore. We have to fight back.” Said Rachel Kijewski, an organizer with the Earth First! movement in Florida.