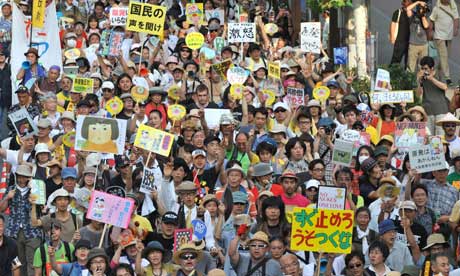 Protesters hold placards and shout slogans as they march to form a ‘human chain’ around Japan’s parliament in Tokyo, to demonstrate against nuclear power plants. Photograph: Kazuhiro Nogi/AFP/Getty Images

Tens of thousands of people protested against nuclear power plants outside Japan‘s parliament on Sunday.

The protesters, including pensioners, were pressed up against a wall of steel thrown around the parliament building. Some broke through the barriers and spilled onto the streets, forcing the police to bring in reinforcements and deploy armoured buses to buttress the main parliament gate.