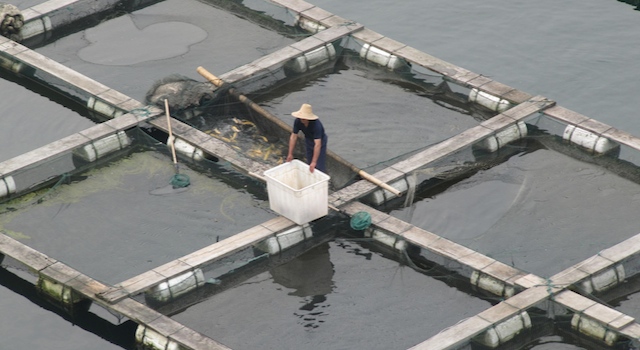 The GMO soy industry, headed by agriculture giant Monsanto, is expanding into aquaculture and its soy will used to feed farm-raised fish meant for human consumption.

A new report from Food & Water Watch and Food & Water Europe states that Monsanto and Cargill are joining forces to cash in on industrial offshore fish farming by using genetically-modified soy as feed. Monsanto has been doing feed trials with its soy products and Cargill has its own aquaculture division. “Factory-Fed Fish: How the Soy Industry is Expanding Into the Sea” takes a look at how soy-based aquaculture will be an environmental nightmare.

Open ocean factory fish farming is often done in overcrowded cages located miles offshore and fish are typically fed fishmeal and oils from smaller fish. That method of farming, even without the addition of GMO soy into the mix, has a profound effect on the oceans and all the life within it. Concentrated fecal matter and uneaten food pollutes the surrounding area, destroys marine life, and can damage coastlines. Throw in genetically-modified soy feed, and the situation gets even worse.

According to the study, fish fed a diet of soy produce more waste than conventionally-fed fish. In addition to the extra waste, GMO feed not eaten by the farmed fish will flow directly into the environment for other marine life to consume, thereby permanently altering their genetics and viability. And if some of the fish were to escape the farm and begin breeding, well – every successive fish born after that will be filled with genetically-modified materials. There will be no going back to non-GMO fish.

Seafood is one of the last food sources on earth to avoid genetic manipulation by companies looking for ways to profit from our food supply, regardless of any long-term consequences. Let’s hope Monsanto and Cargill aren’t able to access and destroy that, as well.