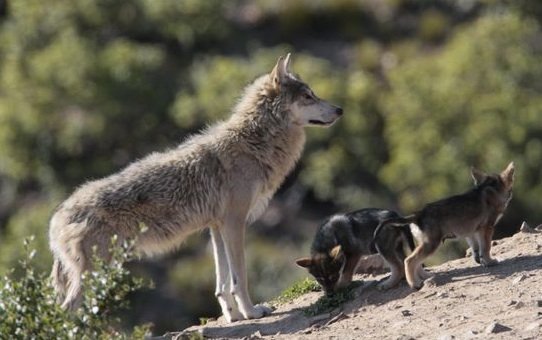 The U.S. Fish and Wildlife Service has been trying to return the predators to their historic range in New Mexico and Arizona for more than a dozen years, but the program has been troubled by issues such as politics, illegal shootings and courtroom battles.

The Mexican gray wolf, a subspecies of the gray wolf, once roamed parts of New Mexico, Arizona, Texas and Mexico. Hunting and government-sponsored extermination campaigns all but wiped out the predator. It was added to the federal endangered species list in 1976, and a captive-breeding program was started.

The first batch of wolves was released into the wild in May 1998, and currently at least 58 wolves remain in the wild in those two states. The most recent annual survey showed at least 18 pups among the packs at the beginning of the year.

Liz Jozwiak, the field coordinator for the Mexican gray wolf recovery program, said several packs are showing signs of denning behavior, which could mean a new batch of pups.

The possibility of pups coupled with the formation of the two new packs in June mark what Jozwiak called a “significant, positive step” for the population, which is scattered across millions of forested acres in southwestern New Mexico and southeastern Arizona.

“Just seeing that there is some natural disbursal and individuals are finding each other, forming packs and having the opportunity to breed is significant,” she said. “I think that’s going to really contribute to the overall recovery of the population.”

But biologists have concerns about genetic diversity within the small population. Without new wolves, inbreeding can result in smaller litter sizes and greater pup mortality.

Last year, the recovery team observed 38 pups in the wild. Less than half survived through the end of the year.

This year, Jozwiak said the team is hoping for a higher survival rate.

“We’re doing everything we can to monitor what the status is of each pack, whether they’re breeding and how many pups they have,” she said.

Michael Robinson of the Center for Biological Diversity, an environmental group that has criticized the management of the wolf program, argued that hope shouldn’t be used as a hedge against Mexican gray wolf extinction.

While two new packs is good news, he said the federal government needs to release more captive wolves to bolster a population that has been kept in check by poaching, a lack of new releases and past instances of trappings and lethal removals triggered by run-ins with livestock.

Ranchers have been just as critical of the program, saying managers have not done enough to protect their livelihood.

One of the new packs, dubbed the Canyon Creek pack, is in the Beaverhead area northeast of the Gila Wilderness. In the past, Robinson said the area was the “epicenter of wolf-livestock conflict.” The area is home to a sizeable elk herd.

The Elk Horn Pack is closer to Reserve, an area that hasn’t had resident wolves.