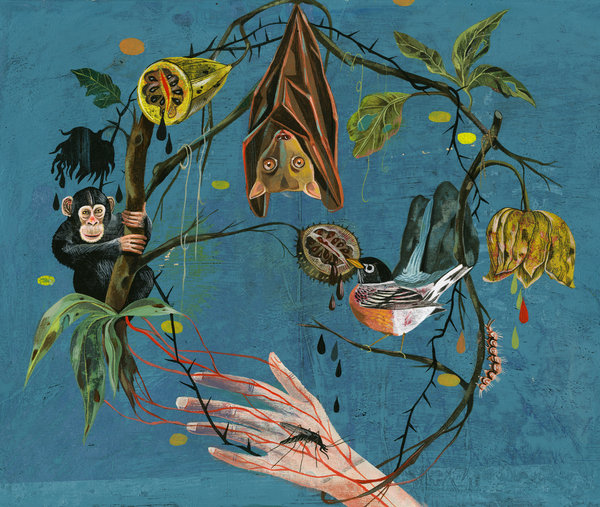 THERE’S a term biologists and economists use these days — ecosystem services — which refers to the many ways nature supports the human endeavor. Forests filter the water we drink, for example, and birds and bees pollinate crops, both of which have substantial economic as well as biological value.

If we fail to understand and take care of the natural world, it can cause a breakdown of these systems and come back to haunt us in ways we know little about. A critical example is a developing model of infectious disease that shows that most epidemics — AIDS, Ebola, West Nile, SARS, Lyme disease and hundreds more that have occurred over the last several decades — don’t just happen. They are a result of things people do to nature.

Disease, it turns out, is largely an environmental issue. Sixty percent of emerging infectious diseases that affect humans are zoonotic — they originate in animals. And more than two-thirds of those originate in wildlife.

Teams of veterinarians and conservation biologists are in the midst of a global effort with medical doctors and epidemiologists to understand the “ecology of disease.” It is part of a project called Predict, which is financed by the United States Agency for International Development. Experts are trying to figure out, based on how people alter the landscape — with a new farm or road, for example — where the next diseases are likely to spill over into humans and how to spot them when they do emerge, before they can spread. They are gathering blood, saliva and other samples from high-risk wildlife species to create a library of viruses so that if one does infect humans, it can be more quickly identified. And they are studying ways of managing forests, wildlife and livestock to prevent diseases from leaving the woods and becoming the next pandemic.

It isn’t only a public health issue, but an economic one. The World Bank has estimated that a severe influenza pandemic, for example, could cost the world economy $3 trillion.

The problem is exacerbated by how livestock are kept in poor countries, which can magnify diseases borne by wild animals. A study released earlier this month by the International Livestock Research Institute found that more than two million people a year are killed by diseases that spread to humans from wild and domestic animals.

The Nipah virus in South Asia, and the closely related Hendra virus in Australia, both in the genus of henipah viruses, are the most urgent examples of how disrupting an ecosystem can cause disease. The viruses originated with flying foxes, Pteropus vampyrus, also known as fruit bats. They are messy eaters, no small matter in this scenario. They often hang upside down, looking like Dracula wrapped tightly in their membranous wings, and eat fruit by masticating the pulp and then spitting out the juices and seeds.

The bats have evolved with henipah over millions of years, and because of this co-evolution, they experience little more from it than the fruit bat equivalent of a cold. But once the virus breaks out of the bats and into species that haven’t evolved with it, a horror show can occur, as one did in 1999 in rural Malaysia. It is likely that a bat dropped a piece of chewed fruit into a piggery in a forest. The pigs became infected with the virus, and amplified it, and it jumped to humans. It was startling in its lethality. Out of 276 people infected in Malaysia, 106 died, and many others suffered permanent and crippling neurological disorders. There is no cure or vaccine. Since then there have been 12 smaller outbreaks in South Asia.

In Australia, where four people and dozens of horses have died of Hendra, the scenario was different: suburbanization lured infected bats that were once forest-dwellers into backyards and pastures. If a henipah virus evolves to be transmitted readily through casual contact, the concern is that it could leave the jungle and spread throughout Asia or the world. “Nipah is spilling over, and we are observing these small clusters of cases — and it’s a matter of time that the right strain will come along and efficiently spread among people,” says Jonathan Epstein, a veterinarian with EcoHealth Alliance, a New York-based organization that studies the ecological causes of disease.

That’s why experts say it’s critical to understand underlying causes. “Any emerging disease in the last 30 or 40 years has come about as a result of encroachment into wild lands and changes in demography,” says Peter Daszak, a disease ecologist and the president of EcoHealth.

Emerging infectious diseases are either new types of pathogens or old ones that have mutated to become novel, as the flu does every year. AIDS, for example, crossed into humans from chimpanzees in the 1920s when bush-meat hunters in Africa killed and butchered them.

Diseases have always come out of the woods and wildlife and found their way into human populations — the plague and malaria are two examples. But emerging diseases have quadrupled in the last half-century, experts say, largely because of increasing human encroachment into habitat, especially in disease “hot spots” around the globe, mostly in tropical regions. And with modern air travel and a robust market in wildlife trafficking, the potential for a serious outbreak in large population centers is enormous.

The key to forecasting and preventing the next pandemic, experts say, is understanding what they call the “protective effects” of nature intact. In the Amazon, for example, one study showed an increase in deforestation by some 4 percent increased the incidence of malaria by nearly 50 percent, because mosquitoes, which transmit the disease, thrive in the right mix of sunlight and water in recently deforested areas. Developing the forest in the wrong way can be like opening Pandora’s box. These are the kinds of connections the new teams are unraveling.

Public health experts have begun to factor ecology into their models. Australia, for example, has just announced a multimillion-dollar effort to understand the ecology of the Hendra virus and bats.

IT’S not just the invasion of intact tropical landscapes that can cause disease. The West Nile virus came to the United States from Africa but spread here because one of its favored hosts is the American robin, which thrives in a world of lawns and agricultural fields. And mosquitoes, which spread the disease, find robins especially appealing. “The virus has had an important impact on human health in the United States because it took advantage of species that do well around people,” says Marm Kilpatrick, a biologist at the University of California, Santa Cruz. The pivotal role of the robin in West Nile has earned it the title “super spreader.”

And Lyme disease, the East Coast scourge, is very much a product of human changes to the environment: the reduction and fragmentation of large contiguous forests. Development chased off predators — wolves, foxes, owls and hawks. That has resulted in a fivefold increase in white-footed mice, which are great “reservoirs” for the Lyme bacteria, probably because they have poor immune systems. And they are terrible groomers. When possums or gray squirrels groom, they remove 90 percent of the larval ticks that spread the disease, while mice kill just half. “So mice are producing huge numbers of infected nymphs,” says the Lyme disease researcher Richard Ostfeld.

“When we do things in an ecosystem that erode biodiversity — we chop forests into bits or replace habitat with agricultural fields — we tend to get rid of species that serve a protective role,” Dr. Ostfeld told me. “There are a few species that are reservoirs and a lot of species that are not. The ones we encourage are the ones that play reservoir roles.”

Dr. Ostfeld has seen two emerging diseases — babesiosis and anaplasmosis — that affect humans in the ticks he studies, and he has raised the alarm about the possibility of their spread.

The best way to prevent the next outbreak in humans, specialists say, is with what they call the One Health Initiative — a worldwide program, involving more than 600 scientists and other professionals, that advances the idea that human, animal and ecological health are inextricably linked and need to be studied and managed holistically.

“It’s not about keeping pristine forest pristine and free of people,” says Simon Anthony, a molecular virologist at EcoHealth. “It’s learning how to do things sustainably. If you can get a handle on what it is that drives the emergence of a disease, then you can learn to modify environments sustainably.”

The scope of the problem is huge and complex. Just an estimated 1 percent of wildlife viruses are known. Another major factor is the immunology of wildlife, a science in its infancy. Raina K. Plowright, a biologist at Pennsylvania State University who studies the ecology of disease, found that outbreaks of the Hendra virus in flying foxes in rural areas were rare but were much higher in urban and suburban animals. She hypothesizes that urbanized bats are sedentary and miss the frequent exposure to the virus they used to get in the wild, which kept the infection at low levels. That means more bats — whether from poor nutrition, loss of habitat or other factors — become infected and shed more of the virus into backyards.

THE fate of the next pandemic may be riding on the work of Predict. EcoHealth and its partners — the University of California at Davis, the Wildlife Conservation Society, the Smithsonian Institution and Global Viral Forecasting — are looking at wildlife-borne viruses across the tropics, building a virus library. Most of the work focuses on primates, rats and bats, which are most likely to carry diseases that affect people.

Most critically, Predict researchers are watching the interface where deadly viruses are known to exist and where people are breaking open the forest, as they are along the new highway from the Atlantic to the Pacific across the Andes in Brazil and Peru. “By mapping encroachment into the forest you can predict where the next disease could emerge,” Dr. Daszak, EcoHealth’s president, says. “So we’re going to the edge of villages, we’re going to places where mines have just opened up, areas where new roads are being built. We are going to talk to people who live within these zones and saying, ‘what you are doing is potentially a risk.’ ”

It might mean talking to people about how they butcher and eat bush meat or to those who are building a feed lot in bat habitat. In Bangladesh, where Nipah broke out several times, the disease was traced to bats that were raiding containers that collected date palm sap, which people drank. The disease source was eliminated by placing bamboo screens (which cost 8 cents each) over the collectors.

EcoHealth also scans luggage and packages at airports, looking for imported wildlife likely to be carrying deadly viruses. And they have a program called PetWatch to warn consumers about exotic pets that are pulled out of the forest in disease hot spots and shipped to market.

All in all, the knowledge gained in the last couple of years about emerging diseases should allow us to sleep a little easier, says Dr. Epstein, the EcoHealth veterinarian. “For the first time,” he said, “there is a coordinated effort in 20 countries to develop an early warning system for emerging zoonotic outbreaks.”

Jim Robbins is a frequent contributor to the Science section of The New York Times.