Leaders from around the globe gathered Wednesday to open three days of talks at the United Nations conference on sustainable development, where a sober, unambitious mood prevailed as negotiators produced what critics called a watered-down document that makes few advances on protecting the environment.

Negotiators worked for months to hammer out a document that many hoped would lay out clear goals on how nations could promote sustainable development—making economic advances without eating up the globe’s resources.

But with time running out, contentious issues like technology transfers from rich to poor nations and new financing for developing countries were set aside. Diplomats agreed on what all call a mere beginning, a step toward a roadmap on how to embrace sustainable development at the conference dubbed “Rio+20″—coming two decades after the landmark 1992 Earth Summit put sustainable development on the globe’s agenda.

“The future we want has gotten a little further away today. Rio+20 has turned into an epic failure. It has failed on equity, failed on ecology and failed on economy,” said Kumi Naidoo, executive director of Greenpeace. “This is not a foundation on which to grow economies or pull people out of poverty, it’s the last will and testament of a destructive twentieth century development model.”

U.N. Secretary General Bank Ki-moon acknowledged the world has made little progress on environmental issues since the first Rio meeting in 1992, but said leaders are working to reverse that at the Rio+20 summit.

“Twenty years ago, the Earth Summit put sustainable development on the global agenda. Yet let me be frank: our efforts have not lived up to the measure of the challenge,” he told delegates. “For too long, we have behaved as though we could . indefinitely . burn and consume our way to prosperity. Today, we recognize that we can no longer do so.”

“We recognize that the old model for economic development and social advancement is broken. Rio+20 has given us a unique chance to set it right.”

Critics blasted the draft document before leaders as requiring little and using language that turns what were once demands into goals for individual nations to aspire for—on increasing use of renewable energy, on protecting forests, on eradicating poverty and hunger.

French President Francois Hollande told reporters that he wasn’t too excited about the summit’s likely results.

“Disappointment, yes, there’s always a bit of disappointment. But I’ve come here to show my hope, my confidence.”

He highlighted what he said were two shortcomings: the failure of the document to create an international agency for development and also the inability of negotiators to agree on additional ways of financing sustainable development, including through a tax on financial transactions.

The same roadblocks that have hindered all environmental summits in recent years have been seen in Rio.

Delegates from developing nations said the U.S. and other developed nations wouldn’t agree to any language in the Rio+20 document that would mandate direct transfers of environmentally sound technologies. The U.S. and other rich nations have said that simply violates intellectual property laws, while poorer nations insist there is no way they can afford to pay for the advanced equipment that would, for instance, allow factories to operate in a way that pollutes less.

The economic crisis cast a clear shadow over Rio+20—and was the reason many heads of state did not show up, like Italy’s Mario Monti. With Europe in crisis and the U.S. still in economic doldrums, delegates said there was no way those nations would agree on new financing for poorer nations to promote sustainable development. The document reflects that.

While Hollande, Russian leader Vladimir Putin and China’s Chinese Premier Wen Jiabao are among more than 100 leaders expected in Rio, there are high-level absentees: U.S. President Barack Obama, Britain’s David Cameron and German leader Angela Merkel are all no-shows, adding to a subdued atmosphere that the action taken in Rio isn’t getting the global spotlight. 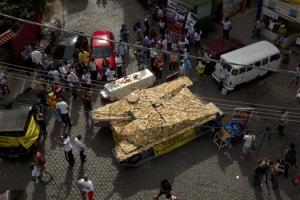 A fake life-sized war tank covered by bread sits on display in the Santa Marta slum as part of a “Bread not Bombs” protest on the sidelines of the Rio+20 UN Conference on Sustainable Development in Rio… Credit: Associated Press