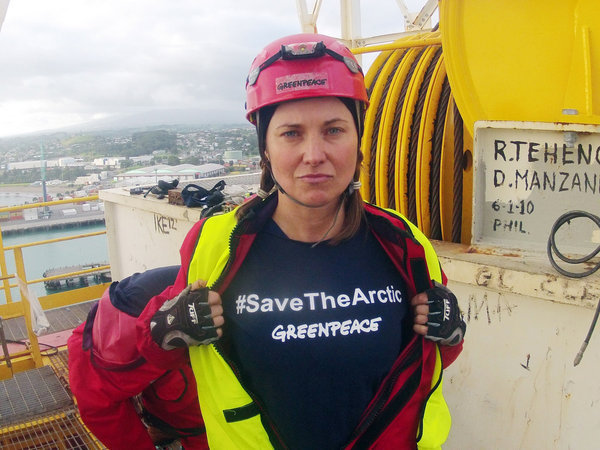 Lucy Lawless was arrested in February after she and other activists boarded an oil-drilling ship in New Zealand and prevented it from leaving port. On Thursday she pleaded guilty to trespass charges. (Greenpeace / Associated Press / February 24, 2012)

Lucy Lawless did it, and she isn’t sorry she did it.

Of course, the “Spartacus” actress hopes her conviction on trespassing charges won’t hurt her career in the future by preventing her from entering countries that don’t dig folks with criminal records, but that’s almost beside the point.

“For the first time in my life, I put my body and reputation on the line to stand up for my beliefs and do the right thing,” she told the Associated Press after appearing in court. “I hope I’ve encouraged other people to do the same.”

Lawless pleaded guilty Thursday in an Auckland, New Zealand, court to charges of unlawfully being on a ship. She was arrested in February with other Greenpeace activists who had boarded an oil-drilling ship and attempted to keep it from leaving port for an Arctic destination.

For 77 hours, the actress camped on and blogged from a 174-foot tower on the ship, which was chartered by Shell Oil.

Sentencing is set for September, and although trespassing carries a possible sentence of three years in prison, Lawless told reporters that as a first-time offender, she expected to serve no jail time. The charge was reduced from burglary.

And about possible travel restrictions, which have bedeviled the likes of Paris Hilton, Russell Brand and Chris Brown?

“If I couldn’t travel, obviously that would be a tremendous pain in the neck,” she said.