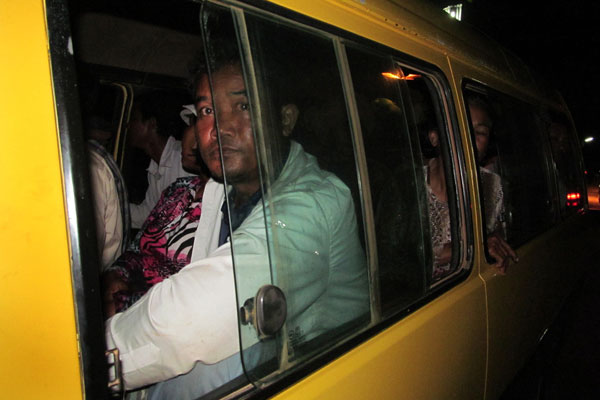 Activists arrive last night at the Wat Thmei pagoda in Koh Kong town, where they planned to stay the night before proceeding today to the area where activist Chut Wutty was shot last month. Photograph: May Titthara/Phnom Penh Post

But hundreds of others from six provinces in a convoy of 27 vans made it to the provincial capital where they were to spend the night at Wat Thmey then travel to Mondul Seima district’s Bak Khlang commune today for a ceremony for Chut Wutty at Veal Bei point.

Chhim Savuth, a co-ordinator for public forums at the Cambodian Center for Human Rights, said villagers travelling from Koh Kong, Kampong Speu and Stung Treng provinces were all blocked.

“It is an illegal action and a violation of human rights,” he said.

In Kampong Thom, Forestry Administration officials forced about 50 villagers travelling to join the convoy to get out of their vans and made them thumbprint a report.

“The [Forestry Administration] authorities should support villagers, because they are opposing illegal logging,” he said, adding that the villagers intended to continue to Veal Veng district, in Pursat province, to confront the timber-clearing company MDS Import Export.

Minh Ny, a villager representative from Kampong Thom province, said villagers from two communes in Sandan district had been blocked.

“I told the administrator that I did nothing wrong, I have to come to attend the ceremony,” he said, questioning under which provision of the law this activity was illegal.

Chut Wutty, the late director of the Natural Resource Protection Group and a confrontational anti-logging activist, was shot dead on April 26 after taking photos of timber stockpiles while travelling with two journalists.

An official report into the incident found that military police officer In Rattana had shot Chut Wutty before he himself was accidently killed during an attempt to disarm him by security guard Ran Boroth, who has been charged with unintentional murder.

Chheuy Odom Reaksmey, one of Chut Wutty’s three children, said he had travelled to Kok Kong to inspect the place where his father was killed.

“I want to know that area [and] why they killed my father,” he said.

Kampong Thom deputy provincial governor Ouch Sam On said he had no policy banning villagers from travelling to Koh Kong province and would ask his officers to clarify.

Koh Kong governor Bun Leut declined to comment because he was busy. His deputy, Suon Nara, said the issue was not related to him.