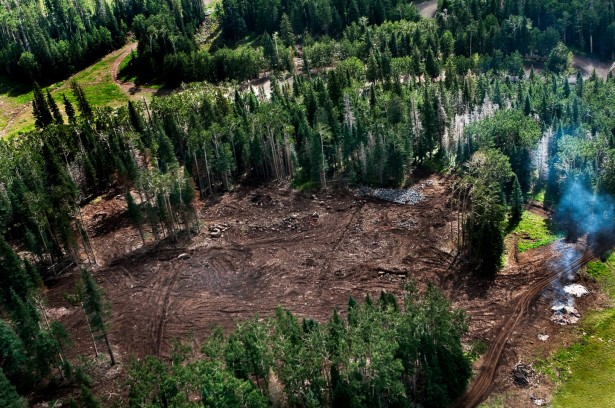 Courtesy John Running
This aerial photo is of the clear cutting that has begun on the San Francisco Peaks. The first step in converting sewage to artificial snow for the Arizona SnowBowls ski area. The Peaks are a sacred site to many Native American tribes.

The Arizona Snowbowl ski area, near Flagstaff, began construction this week on the infrastructure to deliver treated wastewater for snowmaking on its slopes.

Meanwhile, the controversial plan to make snow on the San Francisco Peaks is the subject of new talks between the U.S. Forest Service and the U.S. Fish and Wildlife Service, following the discovery that it could threaten a federally endangered plant.

Tribal activists seemingly lost their last major stand against snowmaking on the San Francisco Peaks earlier this year, when Ninth Circuit Court of Appeals upheld a district court decision dismissing a lawsuit filed by the Save the Peaks Coalition against the Forest Service. But alongside the protracted court battles on behalf of more than a dozen tribes who hold the Peaks sacred, one of them – the Hopi Tribe – has been working quietly on another front.

Construction vehicles and piping are scene on the San Francisco Peaks. (Dawn Dyer)

Hopi tribal chairman LeRoy Shingoitewa hired the Phoenix-based SWCA Environmental Consultants to look for possible threats by the planned snowmaking to endangered species on the Peaks, which include the spotted owl and an alpine plant, the San Francisco Peaks Ragwort. The ragwort, also known as a groundsel, emerged as the most vulnerable.

“I started out this process being very doubtful that there were any particular environmental effects of using the treated wastewater to make snow,” said Steven Carothers, founder and senior scientist at SWCA. “After I had done all my due diligence, I became increasingly apprehensive about some of the long-term effects that could really happen to this plant.”

Carothers determined that the artificial snow is likely to blow into the plant’s critical habitat due to high winds on the Peaks – and the added nitrogen is likely to have harmful repercussions. This is a problem, he said, according to the Endangered Species Act.

“I really do realize that this plant is not being afforded the level of protection which it is due,” he said. He added that it’s incumbent on the Forest Service at this point to reopen the consultations with Fish and Wildlife that are required for impacts to endangered species.

Shingoitewa notified officials with both federal agencies about the findings in early April.

Logs stacked making room for the next phase of construction. (Courtesy Dawn Dyer)

“By this letter, the Hopi Tribe requests that the U.S. Forest Service reinitiate consultation with the U.S. Fish & Wildlife Service under Section 7 of the Endangered Species Act,” he wrote.

Carothers also sent his findings to a Phoenix-based U.S. Fish and Wildlife Service field supervisor, Steve Spangle, in a letter dated May 2.

“The letter does bring up some points we really need to mull over and consider,” Spangle said on May 9. “We’re certainly in discussions with the Forest Service on how best to proceed. Whether we reinitiate [consultation] will be a joint decision between our agencies.”

Shingoitewa’s office did not respond to numerous emails and phone calls requesting comment, but Klee Bennally, a Navajo tribal member and a longtime opponent of snowmaking on the Peaks, said the Hopi finding is just one reason he hasn’t given up hope.

“I believe the issue is not settled by any means,” he said. “It’s absurd that people think this is a dead issue or that it’s over. Our culture isn’t over.”

He said besides the courts, snowmaking opponents have been active from the city of Flagstaff all the way to Washington, D.C. and the United Nations to try to get it stopped.

The clear cutting has started on the San Francisco Peaks in preparation for the sewage that will be converted to artificial snow for the Arizona Snowbowl ski area. (Courtesy Dawn Dyer)

Meanwhile, on May 11 the Arizona Snowbowl filed suit against Howard Shanker in the Ninth Circuit Court of Appeals. The lawsuit is seeking $269,280 for legal fees from the latest round in court. Shanker was the attorney for the Navajo Nation, the Save the Peaks Coalition and other individuals opposed to the artificial snowmaking according to azdailysun.com.

“The Court has already found that Mr. Shanker acted in bad faith in bringing this appeal. It has concluded that Mr. Shanker undertook this appeal with the subjective intent of dragging out Snowbowl’s ‘legal nightmare,’” attorneys for Arizona Snowbowl wrote to the 9th U.S. Circuit Court of Appeals.

“This appears to me to be an attempt by Snowbowl to chill otherwise valid opposition to their plans to desecrate the mountain. Hopefully the court will see their motion for what it is. Unfortunately, it is my understanding that this goes back to the same three judge panel that issued the offensive language in its decision in the first place,” Howard Shanker said in an e-mail to Indian Country Today Media Network.