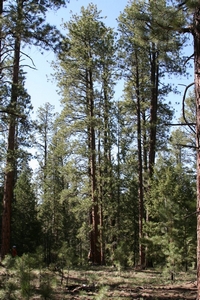 Approved in January, this is the U.S. Forest Service’s fifth attempt to sell old-growth trees and forests in the Jacob Ryan project since 2003. Center appeals blocked two earlier attempts; the Forest Service voluntarily withdrew two others.

“The Forest Service consistently rejects good-faith restoration proposals and pushes logging big, old trees, contrary to its own science,” said Jay Lininger, an ecologist with the Center. “The Jacob Ryan timber sale is the opposite of forest restoration and it shows a need for reform within the agency.”

Today’s lawsuit asserts that the planned sale will remove forest habitat supporting northern goshawks and shirks rules designed to protect this rare and declining woodland raptor. According to a Forest Service report, goshawks are “vulnerable to extirpation or extinction in Arizona.” A source population of goshawks lives on the Kaibab Plateau, where Jacob Ryan is located.

In its last failed attempt to sell old-growth trees at Jacob Ryan, in 2009, the Forest Service admitted violating its rules for logging in goshawk habitat after an appeal from the Center.

Center staff also documented that old-growth trees were marked for cutting in the timber sale, despite agency statements in official planning documents that “yellow-bark” ponderosa pines older than 180 years would be left alone.

“There’s no change in the timber sale,” Lininger said. “Now the Forest Service just admits to wanting to cut down thousands of old-growth trees.”

Photos of the Jacob Ryan timber sale, including old-growth trees marked for logging by the Forest Service, can be seen and downloaded here.