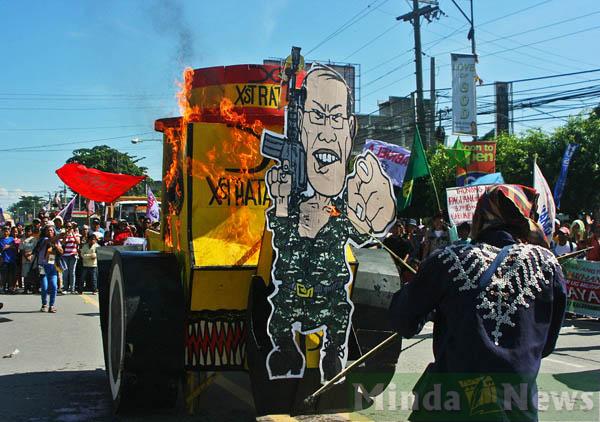 Yesterday, vehicles blocked the way to the development site of the foreign-backed Sagittarius Mines Inc. (SMI) in Tampakan town, Philippines. But is unclear who exactly was behind these blockades.

For some weeks now, members of the B’laan tribe in Bong Mal have set up their own barricades against SMI, in protest of the mining firm’s plan to relocate them out of their ancestral lands.

Ryan Lariba, spokesman of Bagong Alyansang Makabayan in the Soccsksargen Region, tagged SMI and the military as behind the blockade of the solidarity mission caravan.

Lariba said some 500 people from the religious, indigenous peoples and militant groups were bound for Bong Mal to mark Earth Day on Sunday when vehicles stopped them in Barangay Pula Bato. The Tampakan project is touted as the largest known undeveloped copper-gold deposit in Southeast Asia.

Bong Mal, which serves as a crucial artery in SMI’s development site, is the boundary between Tampakan town and Kiblawan, Davao del Sur.

John Arnaldo, Sagittarius Mines corporate communications manager, said SMI is aware of plans by some anti-mining groups to stage rallies. As if reading from a script on corporate public relations, Arnaldo stated that SMI “has always respected, and will continue to respect, the rights of communities to express their views and concerns through peaceful protest.”

“A commitment to ethical behavior guides SMI’s approach to how it responds to actions by stakeholders and how it conducts its business. SMI is committed to open and transparent engagement.”

Opponents of the massive mine were not convinced. According to Lariba, the protesters left the area due to security concerns.

He said they felt disappointed that they couldn’t show their solidarity to the tribal communities in Bong Mal opposing the Tampakan project because of the blockade. Still, he claimed victory for their thwarted activists saying that “the mining company has become desperate that it employed such a trick.”