This afternoon, at 3:00pm, Kellie Vanorden stood before District Judge Steven Andreasen for attempting to release mink from a Sioux City farm.
Kellie pleaded guilty in Woodbury County District Court to releasing an animal from an animal facility and attempted third-degree burglary.
District Judge Steven Andreasen suspended a five-year prison sentence and an additional 305 days of jail time, settling on the 60-day sentence for the attempted burglary charge.
He also placed her on probation for five years and ordered her to have no contact with farm owner Steve Krage and not approach the farm for five years. Kellie will be given credit for 16 days served in jail after her arrest. 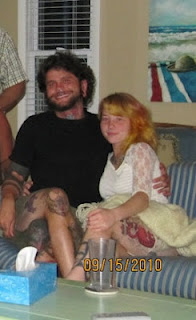 As previously reported, Kellie’s husband (Victor Vanorden) was sentenced to five years in prison in February for releasing an animal from an animal facility and attempted third-degree burglary.
Both Victor and Kellie must pay $8,757 in restitution to farm owner Krage for damage to his fence.

Please visit Support Kellie and Victor for the latest addresses and support requests.

Posted in News and tagged prisoners.