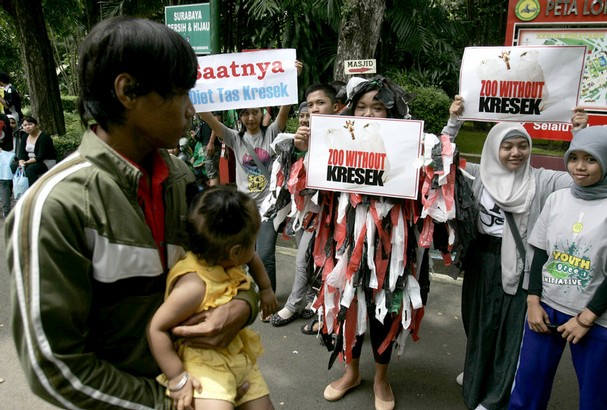 In this Sunday, March 11, 2012 photo, activists hold placards during a protest against the use of plastic bags, locally known as 'kresek' following the death of a giraffe who ingested pounds of plastic food wrappers at Surabaya Zoo in Surabaya, East Java, Indonesia. Indonesia's biggest zoo, once boasting one of the most impressive and well cared for collections of animals in Southeast Asia, is struggling for its existence following reports of suspicious animal deaths and disappearances of endangered species. (AP Photo/Trisnadi)

SURABAYA, Indonesia (AP) — The tigers are emaciated and the 180 pelicans packed so tightly they cannot unfurl their wings without hitting a neighbor. Last week, a giraffe died with a beachball-sized wad of plastic food wrappers in its belly.

That death has focused new attention on the scandalous conditions at Indonesia’s largest zoo. Set up nearly a century ago in one the most biologically diverse corners of the planet, it once boasted the most impressive collection in Southeast Asia.

But today the Surabaya Zoo is a nightmare, plagued by uncontrolled breeding, a lack of funding for general animal welfare and even persistent suspicions that members of its own staff are involved in illegal wildlife trafficking.

Incredibly rare species, including Komodo dragons and critically endangered orangutans, sit in dank, unsanitary cages, filling up on peanuts tossed over the fence by giggling visitors.

“This is extremely tragic, but of course by no means surprising in Indonesia’s zoos, given the appalling way they are managed on the whole,” said Ian Singleton, a former zookeeper who now runs an orangutan conservation program on Sumatra island.

The zoo came under heavy fire two years ago following reports that 25 of its 4,000 animals were dying every month, almost all of them prematurely. They included an African lion, a Sumatran tiger and several crocodiles.

The government appointed an experienced zookeeper, Tony Sumampouw, to clean up the operation and he struggled, with some success, to bring the mortality rate down to about 15 per month. 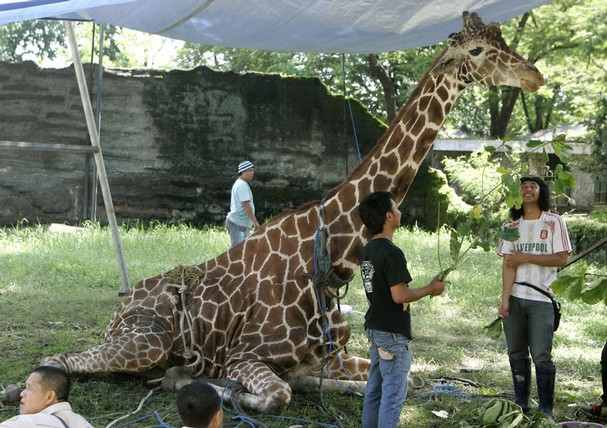 In this March 1, 2012 file photo, Kliwon, a 30-year-old male African giraffe receives treatment from keepers at the Surabaya Zoo in Surabaya, East Java, Indonesia. Kliwon, the only giraffe in the zoo, later died with a huge wad of plastic food wrappers found in its belly. Indonesia's biggest zoo, once boasting one of the most impressive and well cared for collections of animals in Southeast Asia, is struggling for its existence following reports of suspicious animal deaths and disappearances of endangered species. (AP Photo/Trisnadi, File)

‘s death of the 30-year-old giraffe “Kliwon” — who had for years been eating litter and trash thrown into its pen and was found with a 18-kilogram (40-pound) ball of plastic in its stomach — Sumampouw said he’s all but given up.

Nothing short of a “total renovation” is needed, he said.

“We need to either think about privatizing or transferring out some of the animals.”

With entrance fees of less than $2, critics say there’s not enough money to care for the animals, much less invest in improving the zoo’s facilities.

One of the biggest problems is overcrowding.

Whereas most zoos limit the number of animals born in captivity — taking into consideration how many can reasonably be cared for or exchanged with other zoos — the notion of “family planning” has not yet taken off here. Contraceptives are expensive and there are not adequate facilities to separate males and females. As result, species at the Surabaya zoo are bred to excess.

The 180 pelicans are kept in a pen the size of a volleyball court. Nearby, 16 tigers — 12 Sumatran and four Bengalese — are kept in a prison-like row of concrete cages.

One white tiger, whose parents were donated by the Indian government nearly 20 years ago, is now covered by skin lesions.

Let out so rarely, she suffers from back complications that make it difficult to just stand up, let alone walk, zoo curator Sri Pentawati said.

“There are too many tigers,” she lamented. “We have a hard time rotating them out to get all the exercise they need.”

Rahmat Shah — a well known big-game hunter with a museum in the city of Medan that is filled with rhinos, big cats and other animals he’s shot around the world — currently heads Indonesia’s National Zoo Association. He says none of the zoos run by the government are in good condition, but that Surabaya is especially troubled, due to a bitter internal rift.

Two men who each claimed to be the zoo’s chief were fired several years ago, but their followers among the staff have continued the feud.

Police believe the poisoning death of a Javan warthog in January, found with traces of cyanide in its stomach, was linked to that conflict.

“One side is always trying to discredit the other,” said Ludvie Achmad, head of a local conservation agency.

Sumampouw acknowledged he has had little success in controlling the undisciplined staff.

He said he believes some animals, including three young Komodos that disappeared last year, were stolen by caretakers and sold into the exotic pet trade.

Zookeepers also have been accused of taking meat meant for the tigers and selling it in the local market.