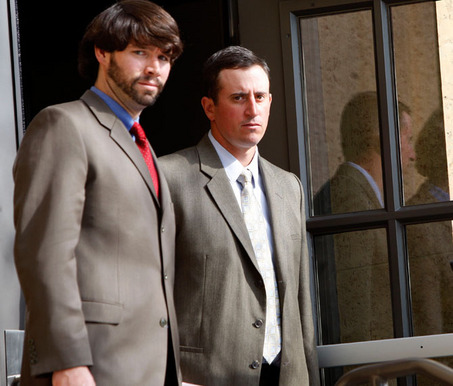 Frank Ambrose, right, walks out of the Federal Court Building in Kalamazoo after being sentenced in 2008.

After a long period of inactivity, 10 sealed documents have recently been filed on Frank Ambrose’s docket. On Dec 21, 2 motions from the AUSA, on Dec 22 an order, on Jan 12 an AUSA motion, on Jan 12 an AUSA document, and on Jan 17 an order. Then, on March 2, a sealed motion and 2 sealed documents; and on March 5th a sealed order. Frank Ambrose is an activist turned informant who provided the government with information against Marie Mason and others.

These sudden secret filings on the docket of a confirmed informant are cause for concern, though it is unclear what to make of it. What is disturbing is that this is occurring in the context of continuing prosecutions in the Midwest. The most recent of these was against David Agranoff, who agreed “to cooperate by attempting to provide substantial assistance to the government.”

Agranoff’s plea agreement, indictment and other documents have been removed from his docket.

Additionally, it is still unknown who the informant is in the cases of Daniel Kruk (Indiana) and Jesse Waters (Michigan)—although it appears from the legal documents in those cases that the informant is not Frank (or at least he is not the only one). The court documents also seem to indicate that the informant in those cases is male and was involved in actions that took place in Michigan and Indiana in 2000 (although there might be more). Jesse Waters was recently sentenced and Daniel Kruk’s case has not been settled.

More information will be posted at Ecoprisoners.org as it becomes available.

[UPDATE: Daniel Kruk appeared in federal court in Indianapolis on Thursday, July 19, to offer a guilty plea and for sentencing. At this hearing, it was disclosed that Kruk has been cooperating with the feds since 2009. He is now listed on the Informant Tracking page, for further details.]