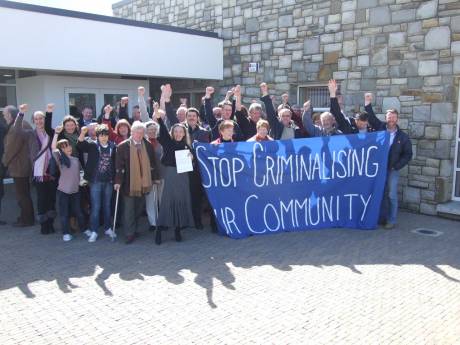 Rossport resisters in front of the courthouse last month

All Shell haulage stopped from 7.30am today by civil disobedience in County Mayo

This morning at 7.30am two campaigners locked themselves to a concrete barrel in the middle of the road near Shell’s main construction site for the Corrib gas onshore pipeline at Aughoose, Co. Mayo. Nineteen campaigners were sentenced and fined a total of 8350 euro for similar actions in a special sitting of Belmullet District Court two weeks ago.

Shell to Sea spokesperson Terence Conway was given two 3 month prison sentences for a similar lock-on actions in 2011, and is currently out on bail pending an appeal to the circuit court.

Spokesperson for Rossport Solidarity Camp Roisin Ní Fhaoilean said, “Despite attempts to break resistance to the Corrib gas project with heavy sentences and fines, blockading of Shell’s haulage is continuing. These actions are intended to halt the Corrib gas project so that it can be reviewed and done in a safe way, under fair economic terms for the people of Ireland and with the consent of people affected.”

“Local residents are being blocked going to work and going to do their shopping by these Shell convoys. Gardaí have been pushing people out of the road and detaining cars on the roadside up to six times a day to clear the way for Shell. This is not part of the traffic management plan proposed by the company, and it is not bearable for people living in the area. Shell’s guarded truck convoys are causing deep disruption to everyday life in this area. It is a huge relief for those who live here that these convoys will now be stopped for the day.”

The concrete lock-on is currently in place this morning and the protest removal team (the garda unit responsible for cutting people out of lock-ons) had not arrived as of 10am.