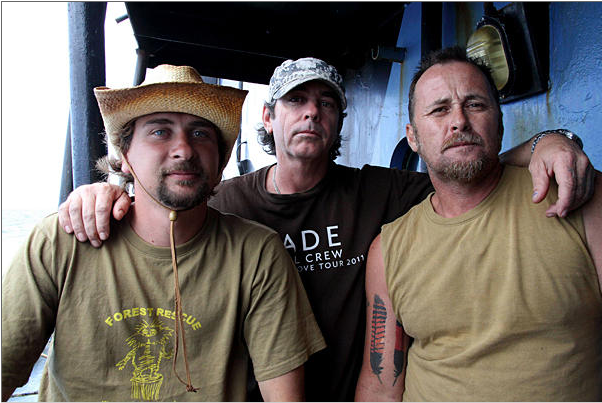 An unscheduled meeting between Japan’s whalers and environmental activists on the high seas seems an unlikely backdrop to an outbreak of détente.

But Australia was quietly celebrating a minor victory for diplomacy on Tuesday after Japan agreed to release three anti-whaling activists who illegally boarded one of its whaling ships over the weekend.

The trio, all Australian citizens, have been detained on the Shonan Maru 2, which is providing security to the fleet, after clambering aboard early Sunday morning to protest Japan’s annual hunts in the Antarctic. The International Whaling Commission banned commercial whaling in 1986 but allows Japan to hunt a limited number of whales for “scientific research.” The fleet left port last month with plans to kill some 900 whales this season.

The incident threatened to cause tension between Australia and Japan, close trade and security partners. Soon after the men were detained it seemed likely that they would be kept aboard the Shonan Maru 2 and taken to Japan, where they faced a trial and possible imprisonment for trespassing.

By late Monday evening, however, Japan had agreed to release the trio, a move welcomed by Australia’s prime minister, Julia Gillard.

Prime Minister Gillard, who came under immediate pressure at home to secure the activists’ release, thanked Japan for its cooperation, but sounded a warning to campaigners thinking of employing similar forms of direct action.

“No one should assume that because an agreement has been reached with the Japanese government in this instance that individuals will not be charged and convicted in the future,” she said in a statement. “The best way to stop whaling once and for all is through our court action.

Australia has lodged a legal challenge to the annual whale hunts with the international court of justice in the Hague but a decision is not expected until 2013 at the earliest.

Canberra’s delicate task was to balance an election pledge to end the whale hunts with a public show of respect for maritime law.

The release, which won’t happen until an Australian coastguard boat rendezvouses with the Shona Maru 2 in several days’ time, was welcomed by Sea Shepherd’s founder, Paul Watson.

But in an interview with Macquarie Radio, Mr. Watson said: “If the Australian government would do their job and fulfill their election promises, these things wouldn’t be happening.”

Japan, meanwhile, insisted the decision to release the men did not mean it had gone soft on Sea Shepherd.

The trio are not members of the group – they belong to another organization called Forest Rescue – and had not injured any members of the Shonan Maru 2’s crew when they boarded, Japan’s chief cabinet secretary, Osamu Fujimura, told reporters.

“The three activists were not violent during or after they boarded the whaling vessel,” he said. “There was no evidence that they were part of Sea Shepherd, which has been engaged in obstructing the fleet.”

Japan may have also had in mind the negative international publicity it attracted in 2010, when it prosecuted former Sea Shepherd member Pete Bethune, who had boarded the Shonan Maru 2 to protest the sinking of the group’s high-tech speedboat. Mr. Bethune, who had been carrying a knife, was given a suspended sentence and deported.

Official support for the whaling program was also put under the spotlight last month when it was revealed that the government had used 2.28 billion yen ($30 million) of taxpayer money intended for the tsunami recovery effort to fund this year’s hunt, on top an existing $6 million annual subsidy. The fisheries agency said the use of the fund was justified because one of the towns destroyed in the disaster was a whaling port.