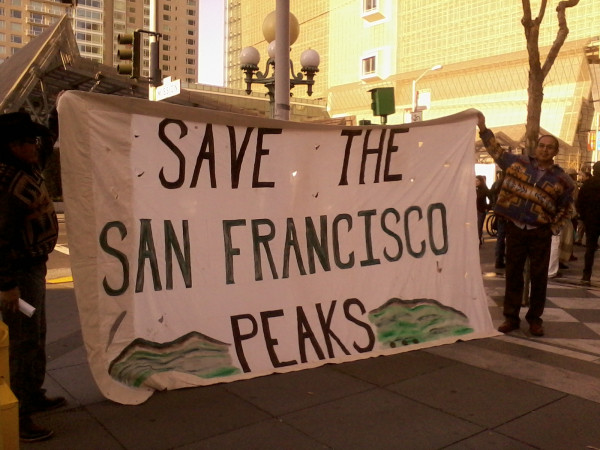 By Save the Peaks
Censored News
http://www.bsnorrell.blogspot.com

SAN FRANCISCO – Five plaintiffs and representatives of The Save The Peaks Coalition, with their attorney and supporters, optimistically exited the James R. Browning United States Courthouse today following oral arguments in the Ninth Circuit appeal of The Save the Peaks Coalition, et al. v. U.S. Forest Service.

The San Francisco Peaks is in imminent danger of becoming a toxic recreation area, exposing people to dangerous contaminants as the US Forest Service allows treated sewer water at the ski resort and proposed snow play area. The Save the Peaks Coalition v. US Forest Service is a crucial legal battle to protect the public and the environment from hazardous pharmaceuticals and endocrine disrupting compounds that can negatively impact public health. The case asserted that under the National Environmental Policy Act (NEPA) and the Administrative Procedure Act, the Forest Service failed to adequately consider the impacts associated with ingestion of snow made from reclaimed sewer water in its federally mandated environmental review process.

“We are concerned citizens with every right to hold our government agencies accountable for our children’s health. I’d simply like to know why the question of how this will effect our future generations has still not been answered. Why do decision-makers continue to dismiss existing scientific evidence that suggests this sewage snow can cause major endocrine disruption? Today this threatens our mountain and drinking water, but the same danger may be faced by your community tomorrow,” explains plaintiff Clayson Benally.

In 2005, the Snowbowl Ski Resort and Coconino Forest Service’s expansion plan was approved, permitting the use of reclaimed sewage water from Flagstaff’s Rio de Flag Sewage Plant for snowmaking at the resort. Since May 2011, owners of the Arizona Snowbowl laid seven miles of waste water pipeline and clear-cut over 50 acres of rare alpine forest, while the issue is still being contested in court. The San Francisco Peaks are sacred to 13 Indigenous tribes in Arizona.

“The decision in today’s three judge panel will determine whether the US Forest Service failed to comply with the National Environmental Policy Act and if the precedent laid out in the Laches case is valid in this instance.” said attorney Howard Shanker. The Laches case is a procedural argument concerning any alleged redundancy of the plantiffs or the case.

Outside on the courthouse steps, plaintiffs and attorneys met with the press and approximately 100 supporters, including an Intertribal youth caravan from New Mexico and Arizona which traveled here to catch a glimpse of the proceedings before the 9th Circuit Court of Appeals. Through song and prayer, individuals unified in efforts to save the holy mountain in Arizona and protect children from the waste water contamination.

“We feel confident in our lawyer. We put our prayers out there so that we can be heard and understood. Our lawyer made a strong argument and with our prayers we are confident in the outcome for the Sacred San Francisco Peaks, “ stated Alberta Nells, part of the Intertribal youth caravan.