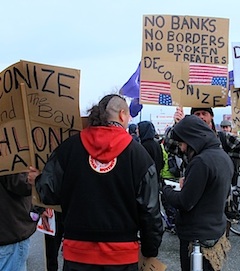 A group of protesters at the Occupy Oakland action to shut down the Port of Oakland on December 12, 2011. (Photo: Queena Kim)

The Occupy movement is known internationally for protesting the inequalities of the global financial system, so much so that in four short months, “Occupy” has essentially become a brand known the world over.

But now there’s an effort by Native American activists in Oakland to get rid of “Occupy” and replace it with “Decolonize” – as in “Decolonize Oakland.” They say the term “occupy” is offensive in light of the brutal history of occupation by early colonizers and the United States government. Native Americans in  Seattle,  Albuquerque,  Portland and Sedona have launched similar campaigns.

The name change is proving contentious at Occupy Oakland, with some protesters accusing Native Americans of  guilt tripping in the name of supporting the oppressed. But cut through the chatter, and the basic point seems to be this: Occupy doesn’t want to give up the brand.

“That name change could … alienate Oakland from the wider movement,” wrote John C. Osbourn, who has been reporting on the Occupy movement on his blog the Classist. “The brand recognition if you will.”

The irony of Occupy Oakland being captivated by “branding” isn’t lost on Morning Star Gali, a Native American activist from Oakland who’s helping lead the name change effort. The Occupy movement, in general, shuns the corporatization of society.

More to the point, Gali says that for many Native Americans, especially those who came up in the “Red Power” movement in the 1960s, the term “Occupy” has a lot of baggage.

Native Americans tribes were brutally “occupied” by Spanish and English colonizers. Later, the United States government waged war on the Native American tribes and forced them into camps or reservations. More than 90 percent of North America’s indigenous population was wiped out by “occupiers,” either through war or the spread of disease.