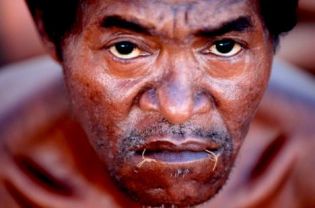 A resident from the Meranti Islands in Riau province sewed his lips shut during an environmental protest outside the House of Representatives building in Jakarta. On Friday six protesters who sewed their mouths shut had to be carried to hospital as they had grown weak after going five days without food. (JG Photo/Yudhi Sukma Wijaya)

If there were any doubts about the fierceness of the debate over Indonesia’s palm oil controversy, they were silenced effectively outside the Jakarta’s House of Parliament on December 21. Ten protestors joined 18 of their fellow migrants and activists from Riau province in the ultimate act of protest against a government concession to a pulp and paper company near their land on Padang Island. They sewed their mouths shut.

This is merely the latest, if most macabre, chapter in a protracted tug of war at the heart of the world’s biggest palm oil producer. Squaring off are environmentalists—domestic and foreign—local populations and indigenous farmers, and an industry worth billions.

Palm oil’s benefits to Southeast Asia’s biggest economy, coupled with mineral and gas reserves, are tough to overstate. Production is anticipated to surge by 6.5 percent—or between 1 million and 1.5 million—to 24.5 million tons by next year, nearly half the world’s output, according to World Wildlife Federation statistics.

Palm oil, and its refined version, or “olein,” is an edible cooking oil used highly in leading, fast-growing food-consumer nations—mainly China, India and Pakistan—and domestically. Increasingly, with E.U. countries steering away from oil, it also has value as a bio fuel.

The mechanics of Indonesian palm oil reverberate across the globe. This fall, for instance, Jakarta reduced olein export tariffs to spur investment and boost production. Ever since, Indian refinery capacity has been convulsing while the Malaysian market, which Indonesia overtook in 2007, struggles bitterly to recover.

But Indonesian palm oil faces the crosshairs over other, higher-profile reasons: The world’s fourth-most-populous nation is under immense pressure to curb forest and peatland clearing—for the sake of endangered species, livelihoods and reduced carbon emissions. 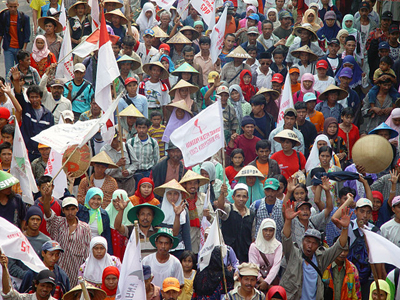 The sheer volume of Indonesian palm oil has drawn criticism. An announcement of a 1.3 million-hectare increase in land devoted to palm oil production between 2000 and 2008, up to 7.3 million hectares, hasn’t helped. This comes amid a 2,000 percent increase over 30 years, according to Indonesia’s Center for International Forestry Research.