Week 6 of more senseless dolphin killing in the famous Cove of Taiji, Japan 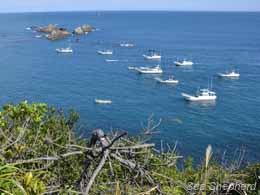 An armada of fishing boats drives a pod of Risso’s dolphins into the Cove. Photo: Cristina Cely

Sunday, October 23, was another horrible day in Taiji. The dolphin killers drove in a pod of 10-12 Risso’s dolphins into the Cove and brutally murdered the entire pod including a baby. These killers have no respect for the lives of sentient beings and they hide behind their so-called culture. They walk around the butcher house in amusement while their arms, hands, and pants are covered in blood, and a police force, some in riot gear, protect their disgusting deeds.

After witnessing the death of the Risso’s dolphins, one of the false killer whales was loaded into a wooden crate and onto a waiting truck. We found out that this false killer whale was bought by Izu Mito Sea Paradise in the Shizuoka Prefecture. The staff from this resort had to wait around on the pier while the