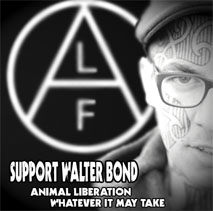 Last week, October 13, 2011, Walter Bond was sentenced to 87 months in prison for Animal Liberation Front arsons in Utah. This new sentencing will run consecutive with his time in Colorado, giving Walter a total of 12 years for his actions as the ALF Lone Wolf. In his final statement to the court, Bond had this to say:

“I’m here today because of the arsons I committed at the Tandy Leather Factory in Salt Lake City and the Tiburon restaurant in Sandy, Utah, which sells the incredibly cruel product foie gras. The U.S. attorney wants to give me the maximum sentence and beyond not because of my “crimes” but because I am unrepentant and outspoken. My intuition tells me that this court is not going to show me mercy because I become suddenly sorry. So instead of lying to the court in a feeble attempt to save myself, as I’m certain many do when they face their sentencing day, allow me instead to tell you what I am sorry for.

“I am sorry that my brother was so desperate to get out of debt that he flew from Iowa to Colorado just to get me in a taped and monitored conversation for reward money. I am sorry I am biologically related to such a worthless little snitch. I am sorry that I waited so long to become an Animal Liberation Front operative. For all of these things I will always have some regret. But as far as the arsons at the Leather Factory and Tiburon, I have no remorse.

“I realize that the laws of the land favor a businesses ability to make a profit over an animals right to life. It also used to favor white business owners ability to profit from a black persons slavery. It also used to favor a husbands ability to viciously attack his wife and act on her as if she were an object. Those who broke the law and damaged property to stand against those oppressions were also called “terrorists” and “fanatics” in their time but that did not change the fact that society progressed and is still progressing along those lines.”

In a statement expressing her full support for her son, Bond’s mother, Mickie Coyote, had this to say about her son: “Walter Bond was born a warrior; he did not choose it because he found a worthy or righteous cause. A warrior is born with a fire inside and a need to right wrongs. He is born with a compassion and caring rooted so deeply that it is difficult to walk away from any sort of cruelty, whether it involves the people, the Animal Nations, the oceans and seas or the whole of Mother Earth and Father Sky.”

In an earlier statement from Bond, he explained that his brother, who’s name is redacted from legal documents, had been working for the ATF since July 1st, 2010. If anyone has any further public information regarding Bond’s brother and the extent of his cooperation, please post it as a comment to the Earth First! Newsire’s Informant Tracking service.

Updated information on sending letters or donations to Bond can be found at his support website: SupportWalter.org