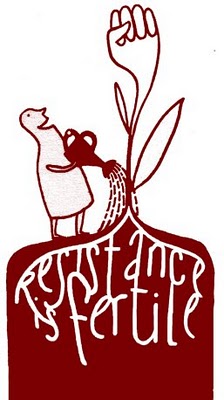 The following is a communique cross posted from Afilado Nuestras Vidas:

During the second week of August 2011 an unknown number of people have destroyed part of an experimental field of GM maize seeds owned by Pioneer. The area located between the towns of Valdivia and Zurbaran had been requested by the company to be opened to the following GMO maize varieties: 1057, 59122 maize, NK603. This field is one of the three requested this year by Monsanto and Pioneer companies to experiment with transgenic corn.

This action is a small response to the imposition of genetically modified organisms (GMOs) by biotechnology companies and the state. Since GM began to be experimented, approved and marketed heavily, its creators and promoters have stated that GM would be able to end hunger or to safeguard human health and the possibility of a cleaner and more efficient agriculture. Nothing is further from the truth.

These GMOs are not compatible with other forms of production and social organization based on the recovery of traditional agriculture that meet the needs of the people, not markets, and do not overflow the boundaries of ecosystems, coupled with the will to escape the illusory link between happiness and consumption.

Models are clearly needed in a hungry and warming world due to the submission to the market and totalitarian states. Therefore these GMOs do not come to fulfill the benefits, but represent another twist to the agro-industrial model, which will, among other things, completely expropriate the people’s their ability to feed themselves. For the final decision of the approval and marketing of GMOs, the state created the National Biosafety Committee (NBC).
Inside there are seven representative NBC scientists, many of them linked to the biotech industry and pro-GM lobby. This body is for the industry, not biosecurity, as evidenced by the growing number of genetic contamination in wheat and corn crops. In whole regions of the state, genetic contamination in crops such as the above named is inevitable.
Outside our borders, these GMOs have been responsible for all types of disasters such as famine, deforestation, poisoning, allergies and other illnesses due to consumption as well as a myriad of constraints to rural communities and farmers by biotech companies, not to mention real massacres caused by the manufacture and use of chemicals needed for this agro-industrial model, of which GM is its ultimate expression. To say GM is not saying “no!” to the evils and injustices that we have cited;  “no!” to imposing: “no!” to the artificiality of life; “no!” to the madness of progress.

The take action against GMOs is a legitimate struggle of all people, symptoms of common sense and the need for profound social change, the result of being aware of the danger to the Earth (and everything that gets penalized) in the hands of capitalism. Those who sow and reap transgenic promotes resistance.

*Translator’s note: Campesin@ is an untranslatable word in Spanish, which usually connotes small, community based, sustainable and subsistence farmers, although it can also be used in reference to field workers under a giant corporation like Chiquita or Dole.