Hearing slated to begin amidst general strike in Athens

[Update: Trial postponed to October 24 due to strike]

Today, October 5th, has been set as the day that the trial of Epanastatikos Agonas (Revolutionary Struggle) will take place in the court room of Koridallos prison, Athens. According to a recent order of the Council of Appeals, eight individuals will be tried for participation in the organization.

The first three accused, Maziotis, Roupa and Gournas have taken responsibility for the organization and remain imprisoned, but in mid October the 18-month detention period expires. The rest of the accused are currently free.

The charges of each individual concern the felonies of constitution and participation in a terrorist organization, supply manufacture and possession of explosive materials, explosions and attempted homicides.

The three members of the underground resistance group that have taken responsibility for their actions claim participation in dozens of attacks on government and corporate targets, including Shell, Athens Stock Exchange and Citibank; they are suspected in many more.

While many of the group’s actions have been focused on challenging social and economic situations in Greece, the group has also expressed its solidarity with ecological and land-based struggles internationally.

In the most specific example, October 2008, the Greek police announced that they defused a powerful homemade bomb placed outside the headquarters of oil giant Royal Dutch Shell in Athens. Police officials had discovered the bomb, which was made up of several kilograms of dynamite and a timing device placed in a plastic container, on a tip-off.

One of the people facing trial, Nikos Maziotis, is also a former political prisoner from an attempted bombing of a government agency which had approved a contentious gold mining operation by the Canadian company TVX, in the village of Strymonikos in 1997.

Its is speculated that today’s trial may result in heavy sentences intended to make examples of these individuals in effort to intimidate the growing sentiment in Greece against the global economic order and its servants in the government—a sentiment that is spreading broadly across the world [even in South Florida, where the EF! Newswire is based] as financial institutions lose stability. 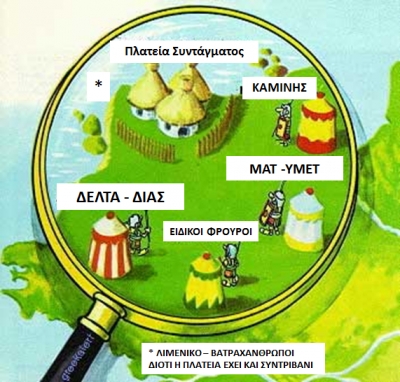 Meanwhile, police and security forces also appear to be cracking down on the movement-at-large in Athens, with a constant presence of riot cops surrounding Syntagma Square, in attempt to repress one of the global strongholds of resistance.