A review of The Heart of the Monster: Why the Pacific Northwest & Northern Rockies must not become an ExxonMobil conduit to the Alberta tar sands, Published and distributed by All Against The Haul, 2010. 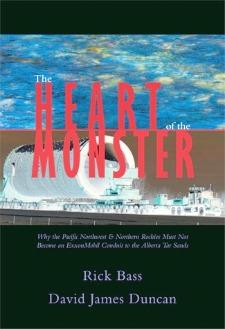 I picked this book up during the Earth First! Rendezvous this summer near Lolo Pass on the edge of Montana and Idaho and put it in my daunting stack of shit to read. A day later we stormed the Governors office and occupied the Montana capitol building in Helena. Six weeks later, thousands would descend on DC for two weeks straight of mass civil disobedience at the White House. I decided it was time to pull the book from my stack. And as I write this review, anti-tar sands organizers are in the midst of preparing for mass actions in Canada’s capitol.

A defining mass movement of our times is underway. The presence of a book like Heart of the Monster is evidence that its roots are settling in for the long haul of a struggle, that the movement is nurturing a broad culture of resistance to fight from.

The book is divided up in two primary sections between co-authors David James Duncan and Rick Bass. The first section is part essay, part memoir mirroring the book’s title. It lays out the facts and statistics of tar sands impacts, touching on some possible options for local alternatives to the energy empire; the latter is presented as a “novella,” A Short History of Montana, with a narrative voice of someone who may or may not have worked as a former aide to a big–headed governor, and his border collie dog […]

[Read the rest of the review, including excerpts, images and links to the ongoing struggle against tar sands infrastructure here.]

[For more reviews from the Earth First Journal, click here]