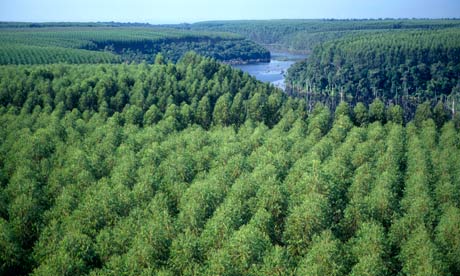 Artificial single-species forests are expanding fast in countries of the developing South, fuelled by low production costs and incentives from governments, and causing severe social and environmental impacts, warned experts from around the world who met last week in the Uruguayan capital.

The so-called “green deserts” are encroaching on the fertile soil of South America and other regions, with the proliferation of plantations of fast-growing and high water-demanding trees to be used to produce pulp and paper, and for other industrial uses, displacing local communities and threatening native ecosystems.

Many governments in the global South support this model of investment, production and consumption, which is replicated from the North, said the participants in theInternational Symposium on Forestation, held Wednesday Sep. 21, the International Day of Struggle against Tree Plantations.

“Some 350 kg of paper per person a year are consumed in Europe, half of which is packaging, while in Brazil and Uruguay the average is 50 kgs per person annually,” Brazilian activist Winfridus Overbeek, international coordinator of the Uruguay-basedWorld Rainforest Movement (WRM), told IPS.

Overbeek said that in Europe as well as North America, there is no longer enough space to plant the trees required for that high level of consumption, so companies are shifting production to countries of the developing South.

He also pointed to the different opportunities found by transnational corporations in the developing world, where fertile land abounds and production costs and wages are lower than in the industrialised North.

In several countries of Latin America, as well as in southern Africa and in Asia, monoculture eucalyptus and pine plantations are advancing, to supply paper pulp factories. Plantations of oil palm, first established in Indonesia, are also expanding in those areas.

read the rest of the article at the Guardian Environmental Network