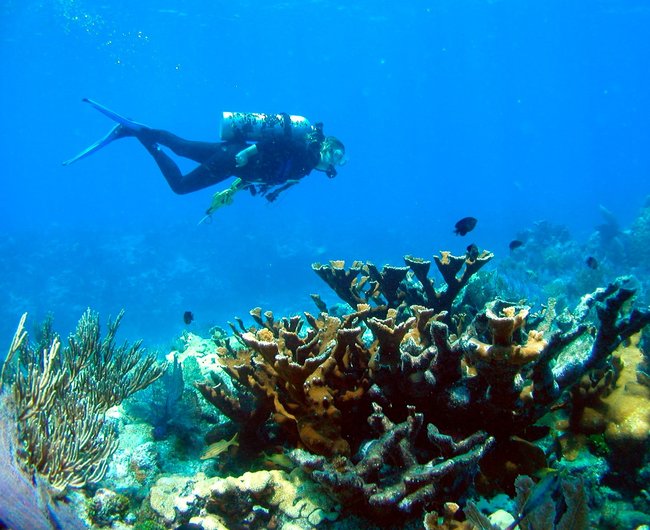 Environmentalists have expressed concerns about how a dredging project at the port of Miami will affect elkhorn coral, left, which helps build and stabilize reefs. Photo: Reuters

Miami—This fight for the wild ocean maybe be a critical part of defending all life on Earth from the clutches of the industrial economy. Yesterday’s New York Times reported that as Miami prepares to dredge its port to accommodate supersize freighters, environmentalists are making a last-ditch effort to protect threatened coral reefs and sea grass that would be destroyed by the expansion. Sounds like the locals might be in need of some direct action reinforcements.

The state’s Department of Environmental Protection is on the verge of granting a final permit to the Army Corps of Engineers, which will be free to conduct 600 days of blasting to widen and deepen the channel for the port of Miami, across from the southern part of Miami Beach.

About seven acres of coral, some of which is part of a state preserve, is expected to be directly affected by the blasts, including Elkhorn and staghorn coral, which are categorized as threatened under the Endangered Species Act. Nearly eight acres of sea grass will be damaged during the expansion. All for the purpose of receiving superfreighters that will sail through the Panama Canal in 2014 once it has been widened.

Florida has seen steep declines in coral in the last 25 years, and last year’s cold snap devastated the reefs closest to shore. Some of those lost 70 percent to 75 percent of their coral, according to Diego Lirman, a University of Miami scientist who was part of a team that conducted a survey of the coral last year and published its findings in August.

Another study by biologists found that bacteria from human fecal waste had played a major role in choking elkhorn coral. For years, human waste from the Florida Keys seeped, or in some cases poured, into the ocean via septic tanks and pipes.

“There were a couple of acres of this coral, and now there is enough to cover your desk,” said Ken Nedimyer, president of the nonprofit Coral Restoration Foundation in the Florida Keys, which grows and restores coral through an underwater nursery.

“Biscayne Bay is actually a crystal-clear bay. It’s that way because we have acres and acres of sea grass beds filtering silt and sand out. It’s part of the beauty. It’s a shallow tropical lagoon that was never contemplated as a deep-dredge port.” That’s what Blanca Mesa, volunteer for the Sierra Club Miami, had to say.

Now let’s hear what all those boat-squatting eco-anarchists out there have got to say.

In other news from the Florida’s reefs

Broward County wants to avoid new, hard-won standards to protect coral reefs from the dumping human shit offshore. Alan Garcia, Broward County’s water and sewage director, said there’s no hard scientific evidence that sewage discharges harm coral reefs. Broward’s Mayor Sue Gunzburger has said in the past, “If there’s anything we can do to avoid meeting that standard by 2025 Broward wants to do it. It’s a very expensive, unfunded mandate that I don’t think would make much difference when it comes to the ocean.”

This is the same Broward County that will host the US Coral Reef Task Force meeting in Fort Lauderdale, October 18-21.  See details here: “National Attention Focused on Florida’s Coral Reefs”