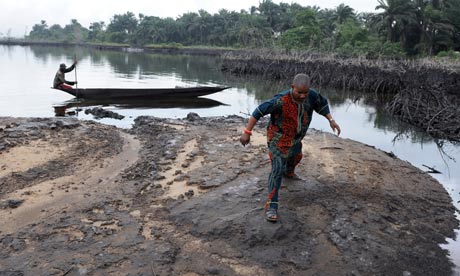 Oil spill on the shores of the Niger Delta swamps of Bodo, a village in Niger's oil-producing Ogoniland. Photograph: Pius Utomi Ekpei/AFP/Getty Images

Excerpts below. To read full article go to source: Cross-posted from here

Goi is now a dead village. The two fish ponds, bakery and chicken farm that used to be the pride and joy of its chief deacon, Barrisa Tete Dooh, lie abandoned, covered in a thick black layer. The village’s fishing creek is contaminated; the school has been looted; the mangrove forests are coated in bitumen and everyone has left, refugees from a place blighted by the exploitation of the region’s most valuable asset: crude oil.

Last Thursday, a long-awaited and comprehensive UN study exposed the full horror of the pollution that the production of oil has brought to Ogoniland over the last 50 years.

The UN report showed that oil companies and the Nigerian government had not just failed to meet their own standards, but that the process of investigation, reporting and clean-up was deeply flawed in favour of the firms and against the victims. Spills in the US are responded to in minutes; in the Niger delta, which suffers more pollution each year than the Gulf of Mexico, it can take companies weeks or more.

Goi, 40 miles from Port Harcourt, is a typical case. Just a few miles from where Shell first found oil in Ogoniland in 1958, it is only 20 miles from Bane, the ancestral home of Ogoni writer and leader Ken Saro-Wiwa. People from Goi joined the great Ogoni protest march of 1994, when one in three people from the small kingdom of 900,000 rose peacefully against the company, preventing it from working any of its 30 wells in the area. Two years later, Saro-Wiwa and eight Ogoni leaders were tried on a fabricated murder charge and executed.

On Wednesday, Shell formally accepted responsibility in British law for two significant spills in nearby Bodo. Those were rare victories. More than 1,000 court cases have been taken against Shell for pollution in the last 30 years, but almost all are rejected, settled for a few dollars or remain mired in the legal system for years. Even when the courts rule against the company and fine it millions, it is possible for it to appeal, with legal delays draining communities of cash. One case against Shell taken by people in Goi is still in the courts after 14 years.