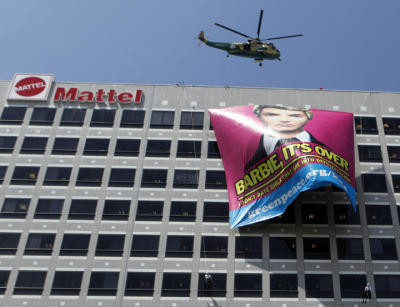 Greenpeace activists climb down the front of the 15 story Mattel building in El Segundo and display a giant banner protesting the toy compnay's use of paper packaging material from the Indonesian rain forests while a Los Angeles County Sheriff helicopter flies above them. June 7, 2011. (Mark Boster / Los Angeles Times)

Toy giant Mattel Inc. on Friday announced that it is developing a “sustainable procurement policy” to avoid using packaging that contributes to deforestation.

“Mattel has a long track record of playing responsibly across all areas of our business, which includes how we impact the world around us,” Lisa Marie Bongiovanni, Mattel’s vice president of corporate affairs, said in a statement Friday. “While we don’t have all the answers yet, we are working to make continual improvements across our business, and that includes packaging.”

Greenpeace said Friday that Mattel’s move was encouraging, but vowed to continue its campaign against the toymaker.

“The document still needs to be written and we also need to be sure that the world’s largest toy company is going to show leadership on this issue,” said Rolf Skar, Greenpeace senior forests campaigner, in an email to the Daily Breeze. 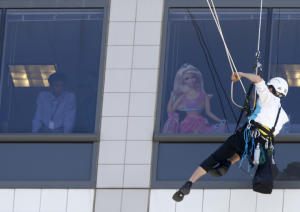 Greenpeace activist Jared Cobb dangles past a cutout of Barbie after nearly three hours of unfurling a giant banner across the Mattel building in El Segundo protesting the toy company's use of paper products from the Indonesian rain forest June 6, 7, 2011. (Mark Boster / Los Angeles Times)

Greenpeace also used Facebook and Youtube to criticize Mattel’s use of wood pulp harvested by a Singapore firm, Asia Pulp & Paper, that the group accuses of

Deforestation is a major contributor to global climate change and the destruction of animal habitats.

Late Wednesday, Mattel seemed to make a major concession by saying that it directed its packaging suppliers to stop sourcing pulp from APP.

Mattel also said it “launched an investigation into the deforestation allegations.”

APP has denied that it contributes to deforestation and welcomed Mattel’s investigation.

However, Greenpeace said it was not satisfied because Mattel lacked a “comprehensive policy to deal with this issue.”

The international group, known for its confrontation of commercial whaling ships on the high seas, said it wants Mattel to “immediately to stop dealing with suppliers linked to rain forest destruction.”

Greenpeace also wants Mattel to ensure its packaging suppliers have “rigorous standards for all of their products.”

The environmental group said it is willing to help Mattel develop its procurement policy.

In Mattel’s statement Friday, the firm said it would require its packaging suppliers to “commit to sustainable forestry management practices.”

Mattel said its policy will also encompass other wood-based products in its toy lines from paper and books to accessories.

In April, the toy company said it completed a “lifecycle assessment” of its packaging to determine how to reduce its impact on the environmental.

Among other things, Mattel said, it reduced, by 90 percent, its use of twist ties that keep toys secured to their packaging since 2008.

Greenpeace started its campaign against Mattel a few months after the toymaker launched a marketing blitz heralding the renewed romance between its top-selling doll Barbie and ex-boyfriend Ken.

The environmental group tried to disrupt this high-profile reconciliation with banners and videos that depicted Ken dumping Barbie for her deforestation activities.

The banner at Mattel’s headquarters read: “Barbie, it’s over. I don’t date girls that are into deforestation.”