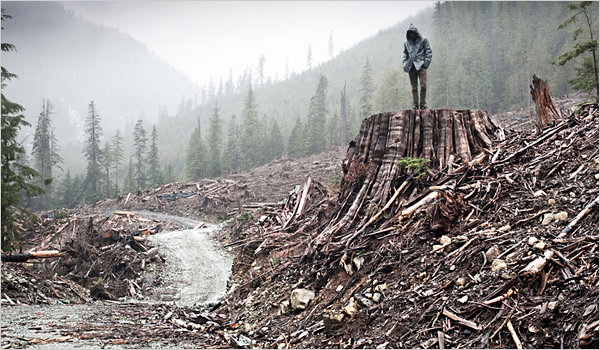 "If a Tree Falls," directed by Marshall Curry, is a documentary about the environmental activist Daniel McGowan, a member of the Earth Liberation Front, who was convicted of arson.

By JOHN ANDERSON
Published by the New York Times: June 8, 2011

WHEN Daniel McGowan moved in with his sister after college, he was so passionate about recycling that he took all the labels off her canned food. The problem was, he didn’t wait for her to open the cans. “I didn’t know if I had soup, or what kind of soup; I don’t know if there’s peas, or corn,” Lisa McGowan said in an interview. “He said, ‘I never thought of that.’ ”

Some would call Mr. McGowan overeager. The government calls him a terrorist.

Mr. McGowan is the unlikely protagonist of “If a Tree Falls: A Story of the Earth Liberation Front,” the latest film by the documentarian Marshall Curry, whose meta-subject seems to be the existential contradictions of American life. In “Street Fight” he carried his camera into the election battle between the incumbent mayor of Newark, Sharpe James, and upstart Cory Booker, a contest between African-Americans that somehow became about race. With “Racing Dreams,” a largely upbeat film about the hopes of kid race-car drivers in the South, he portrayed Nascar much the way “Hoopwww.imdb.com/title/tt0110057/ Dreams” did the N.B.A., as a high-stakes fantasy.

With “If a Tree Falls,” Mr. Curry performs another balancing act: examining the roots of radical environmentalism, the destruction wrought by the Earth Liberation Front beginning in the mid-’90s and the definition of terror as used by the federal government. In the process he presents a character who defies most of the presumptions, and stereotypes, of terrorism in the post-9/11 world.

An articulate, politically progressive but not overtly passionate New Yorker, the nondescript Mr. McGowan is shown padding about his sister’s apartment, washing out plastic bags, separating garbage for composting. He talks about the Earth Liberation Front as something he’s long forsaken. Then there’s a glimpse of his ankle bracelet. A few words about his court case. All leading up to his eventual relocation, to the place he now calls home: a medium-security federal prison in Terre Haute, Ind.

“If a Tree Falls” is not a whodunit. Mr. McGowan admits to having participated in arson committed by the front, a group the F.B.I. called America’s No. 1 domestic terror threat in 2001, though no one was harmed during its acts of property destruction. “They wanted to give him 330 years for burning down two empty buildings,” Ms. McGowan said of her brother, who received a seven-year term but was sentenced under terrorism enhancement provisions of the law, and is thus limited to one visit a month, behind glass.

During a recent interview in Manhattan Mr. Curry enumerated questions he hopes to raise. “Is it terrorism?” he asked, referring to his subject’s crimes. “What is terrorism? Is property destruction ever appropriate? What are suitable tactics?”

Successful documentaries have the same needs as successful fiction, including a strong narrative and complex characters. But documentarians also have to recognize the knock of opportunity. In 2005 Mr. Curry was working on “Racing Dreams,” when his wife told him about a strange day at work: Federal agents had invaded her offices and arrested her employee Daniel McGowan, as part of a nationwide sweep.

“He was a guy I’d met a few times through her, and I had no idea,” Mr. Curry said. “In fact, when we started shooting the film, he said he hadn’t done it. My wife was convinced he hadn’t done it. And when you see him, he sure doesn’t seem like that kind of guy. But it became clear after a while that that was not the interesting story. The story was why he did it.”

There are certainly more charismatic or even dangerous-seeming characters in “If a Tree Falls.” They include Jake Ferguson, who instigated notorious acts (like the burning of an S.U.V. dealership) before turning informant to avoid prison time. Then there’s the activist and filmmaker Tim Lewis, who provides background on radical Northwest environmentalism, and whose involvement was another instance of uncanny circumstance: Mr. Curry and his co-director, Sam Cullman, in New York, needed a cinematographer to shoot at the Eugene, Ore., courthouse.

They posted an ad on Craigslist. Mr. Lewis answered. On their next visit, Mr. Curry recalled, “Tim said, ‘Oh, and I have this footage you might be interested in.’ ”

That footage, some of the film’s most galvanizing, includes a 1997 episode in Eugene surrounding the cutting down of old-growth trees for a parking lot. When the cutting was abruptly rescheduled to the day before the City Council was to take up the issue, a confrontation between police and environmentalists ensued. The not-quite-articulated message of “If a Tree Falls” is that a citizenry deprived of a voice may embrace more drastic measures, even a citizenry as mild as Mr. McGowan.

Whether those measures amount to terrorism becomes a semantic, and political, argument. Lauren Regan, a member of Mr. McGowan’s legal team, said the word terrorism had been used politically: “You use such a serious word for something that doesn’t live up to most people’s expectations of that word, it really diminishes the power and the importance of the word.”

But Assistant United States Attorney Stephen F. Peifer, one of the prosecutors in the case, called Mr. McGowan “a classic example of someone who gradually ratcheted up his radicalism over time.”

“I prosecuted one of the most infamous abortion clinic firebombers, Shelley Shannon, and she did the same for that cause,” he said.

Citing a decision by the Seventh Circuit Court of Appeals, Mr. Peifer said, “If you use violence or the threat of violence to further your ideological goals, you’re guilty of terrorism.” The terrorism provisions under which Mr. McGowan was sentenced, he noted, had not been a reaction to 9/11, but to the 1995 Oklahoma City bombing.

Nick Fraser, of the BBC’s documentary arm, Storyville, which partly financed the film, said he liked “Marshall’s curiosity and evenhandedness.”

Mr. Curry, however, has a conflicted relationship with evenhandedness. “This he said/she said approach to reporting makes me insane,” he said. “You watch a debate on TV, and they have the pundit come on to tell you the three things both candidates exaggerated. And I think: ‘How curious that they both exaggerated three times. Isn’t that interesting.’ Media, filmmakers or otherwise, should be referees, and the good referee doesn’t call the same number of fouls on both sides.”