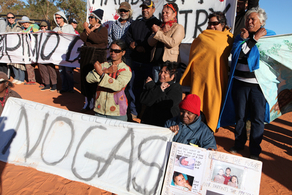 More than 70 protesters are still blocking the main access road to the site of Woodside’s proposed LNG precinct at James Price Point, 60km north of Broome.

A convoy of Woodside contractors has returned to Broome and no work will be carried out today, The West Australian understands.

A new blockade was set up on the corner of the Manari Road, closer to the Broome town site, preventing contractors’ access since 5am today.

The protesters have blocked the road, which leads to Broome’s iconic Willie Creek Pearl Farm, but are allowing vehicles not associated with land clearing at James Price Point through the blockade.

Several local indigenous women have been leading the blockade and are refusing to allow vehicles down the road.

Janet and Rowena Puertollano said Woodside and the WA Government should be consulting the entire Broome and Kimberley community about the gas precinct, and not just the Goolarabooloo/Jabbir Jabbir traditional owners of the area.

Both women say they are descendants of Jabbir Jabbir people, but were not allowed to vote in the recent ballot which approved the development in exchange for $1.5 billion in benefits over the life of the project.

Janet Puertollano said that if her family had been included in the group it would have changed the outcome.

The Kimberley Land Council and Woodside have been contacted for comment.