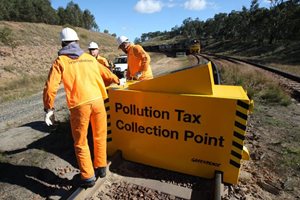 A Greenpeace activist had halted a Hunter Valley coal train by bolting a steel box to the lines and locking himself inside.

The box stopped a coal train leaving BHP Billiton’s Mt Arthur coal mine, which managed to halt just 70 metres before it.

The box measures 1.5 metres by 2.5 metres and is bolted to rail line from the inside.

According to the ABC, Howden said he is ready to stay inside the box for the next three days.

The move is part of a wider Greenpeace protest against mining industry attempts to halt the carbon tax.