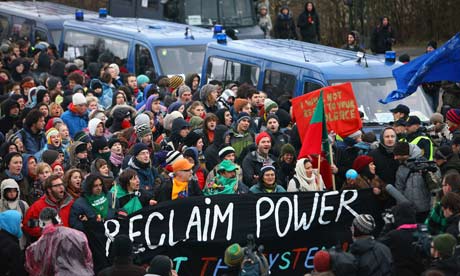 Two climate activists were jailed on Wednesday by a Danish court for incitement to violence against police officers after they shouted the word “push” during a demonstration outside the 2009 UN climate negotiations in Copenhagen. The two women in their 20s, Tannie Nyboe and Stine Gry Jonassen, were judged to have endangered the lives of police officers who were trying to hold back a crowd of demonstrators attempting to force their way through to the conference centre in which the talks were taking place.

The court heard how the pair, both members of the environmental protest group Climate Justice Action, had counted down from 10 and then shouted “push” using a microphone. For this they were found guilty of inciting violence by four of the six judges and sentenced to four months in prison, two of which were suspended.

Their defence lawyer, Thorkild Høyer, said the judgment was “foolish” and sent the wrong message. “This was one of the most peaceful demonstrations to take place during the whole COP15 [climate conference]. It wasn’t violent, nobody got hurt and nobody was arrested at the time. By passing this judgment they are sending the message that even if you plan a peaceful protest you will be arrested anyway, so it follows that people may think ‘Why should I bother being peaceful at all?'” he said.

Wednesday’s decision was the latest twist in a case that has been continuing for some months. Last November the pair were found guilty of the same offence in a city court and given suspended sentences. But public prosecutor Henrik Aagaard considered the judgment too lenient and appealed for it to be re-examined in the high court, which duly decided to pass a stiffer sentence to reflect the danger posed to the police and send a clear message to demonstrators about the severity of this type of protest action.

“We wanted the case reopened because we believe this kind of action should warrant a prison sentence,” Aagaard told news agency Ritzau.

But Høyer, the womens’ defence lawyer, didn’t see it that way. “Some of the so-called demonstrators were delegates attempting to get into the conference. If anyone has committed a crime here it’s the police, who illegally prevented delegates from attending the talks,” he said.

Denmark has been the focus of criticism for the way it handled demonstrations during the 2009 climate conference, with accusations of heavy-handedness levelled at the police.