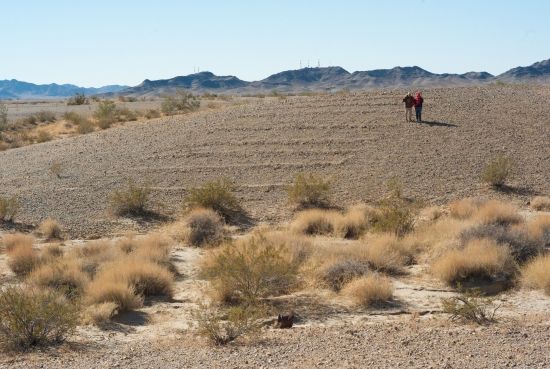 According to Figueroa, "The Temple" remains on proposed project lands slated for development by Solar Millenium, LLC, and permitted by the BLM. Photo Robert Lundahl

Activists with the group Desert Survivors held a simultaneous rally in front of Solar Millennium’s Oakland headquarters. According to spokesperson Bob Ellis, “We support the La Cuna de Aztlan Sacred Sites Protection Circle in their efforts to defend the Kokopilli intaglio and the many others on or near the project site. We favor investment and jobs for solar development in the urban areas where both the energy and the work is needed. Photovoltaics in the city are much more economical than remote, extra-expensive, obsolete, solar thermal mega-projects.”

A video documentary of the June 3, 2011 Blythe events by Emmy Award® winning documentary film-maker Robert Lundahl may be viewed on-line here: http://www.vimeo.com/24720844, and here: http://youtu.be/PtUMmON467w (“Messages in the Rocks”). After construction began at the site, Lundahl first visited the altered location on May 22, 2011 with La Cuna representatives, and created, “No Shame, No Respect: Solar Millennium Builds a Road on Ancient Geoglyphs,” http://www.vimeo.com/24295431, and http://youtu.be/Bgha7Af_Wzc, to document the story. Lundahl is producing a feature documentary on the subject.

The geoglyphs in question are ancient, large drawings made on the surface of the ground. They were made by scraping away manganese stained pebbles, to reveal lighter toned caliche below. The geoglyphs represent human-like figures and geometric forms. Their location on major trails used by multlple indigenous groups attest to their widespread cultural importance.

Although La Cuna De Aztlan Sacred Sites Protection Circle has a Memorandum of Understanding (MOU) with the Bureau of Land Management (BLM), to work together to protect geoglyphs and other cultural resources in the area, the MOU was ignored by the BLM in the permitting process, says the group’s founder, Alfredo Figueroa.

Indications are that the geoglyphs may be very old. According to anthropologist Jay von Werlhof et. al, in a paper titled “AMS 14C Age Constraints on Geoglyphs in the Lower Colorado River Region, Arizona and California, in Geoarchaeology: An International Journal, 1995, a representative sample of geo-glyphs along the Lower Colorado date from between AD 213 and AD 1408 with margins of error of between 57 and 392 years depending on the particular location.

The Blythe Geoglyphs are not the only cultural resources endangered by a planned “build-out” of large solar in the Mojave Desert. According to the testimony of Elizabeth A. Bagwell, Ph.D., RPA and Beverly E. Bastian before the California Energy Commission, “This analysis estimates that more than 800 sites (Cultural Resource Sites–Sacred Sites) within the I-10 corridor, and 17,000 sites within the Southern California Region will be potentially destroyed (by large solar development in application with the BLM)…”

The BLM denies any geogyphs are endangered, but La Cuna technicians indicate several remain on the project lands. Lundahl’s video ‘Messages in the Rocks,’ specifies which sites are vulnerable. La Cuna De Aztlan’s GPS coordinates for these sites are available to the press.

According to La Cuna de Azlan’s Chairman, Patricia Pinon, the pressure of the ARRA “fast track” process approved by Secretary of the Interior Ken Salazar resulted in inadequate Environmental Impact Statements and inadequate government to government consultation with the tribes and native groups. Bill Powers of San Diego based Powers Engineering, a solar energy consulting firm states, “So the Orwellian aspect of the government involvement in this process is that now instead of the analysis being focused on is this a cost effective project, is it a project that will minimalize or eliminate environmental damage, is it a good investment strategically for this state, all of that is secondary for the race to get the permit so that the project can get a 30 percent cash grant.

In this case — that’s $600 million up front per project. So the money is so big that it’s now like a bull rush to the finish line.” In order to qualify for rebates, Solar Millenium needed to “break ground” at the site. So far, the company has graded a 100 ft. wide transmission corridor extending three miles along the path of a former gas line road.

According to La Cuna, the sacred sites destroyed include a cleared circle representing the Sun, and a second geo-glyph, known as “True North.” “These images are part of our tradition of scientific inquiry predating Galileo, Copernicus, and early European astronomers,” Pinon declares, “They correlate to astronomical observations.”

According to a study commissioned by La Cuna de Aztlan, and conducted by an MIT trained engineer, there are at least 19 geoglyphs and cultural resources in the immediate landscape surrunding the 9500 acre site. According to the most recent project boundaries available, at the time of the final EIS (FEIS, 08/02/10) least 5 were within project boundaries.

Regarding the sites in question, ”There is much to learn,” Pinon adds. But generations to come may not have that opportunity unless a suit brought in federal court by La Cuna de Aztlan succeeds. On December 28, 2010, La Cuna de Aztlan Sacred Sites Protection Circle filed complaints in United States District Court, Southern District of California, challenging the Bureau of Land Management permitting processes related to six large solar facilities planned for the Mohave, Sonoran and Colorado deserts of Southern California.

The group was joined by CARE, Californians for Renewable Energy, and 6 individual Native American plaintiffs. Case numbers for complaints, now re-filed, are as follows: Blythe: 11-CV-04466, Ivanpah: 11-CV-00400, Chevron: 11-CV-00395, and Imperial: 10-CV-02664. Complaints referring to the Calico and Genesis projects have not yet been re-filed. Project applicants and the Department of Energy have since been named as defendants.

The suit follows the filing of the Quechan tribe’s legal challenge to the imperial Valley Solar Project which was granted an injunction by Judge Larry Burns on December 15, Civil Action No. ’10CV2241 LAB CAB, United State District Court for the Southern District of California. La Cuna de Aztlan’s complaint adds another impediment for industrial development of the desert.

According to Figueroa, Solar Millennium’s grading was an “irresponsible act” designed to “set the stage for the transfer of U.S. taxpayer rebate and loan guarantee monies.” Figueroa, whose Native American lineage is both Yaqui and Chemehuevi, says he and his family are devastated by “this atrocity committed without morals, and without proper analysis.”

He says that La Cuna de Aztlan Sacred Sites Protection Circle will do everything in its power to stop the ongoing “cultural genocide,” which he likes to the Taliban’s destruction of the 6th century Bamiyan Buddhas in Afghanistan. The Buddhas were intentionally dynamited and destroyed in March 2001 on orders from leader Mullah Mohammed Omar after being declared “Idols.”