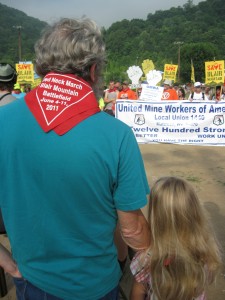 MARMET, West Virginia— On Monday morning, hundreds of people began a weeklong, 50-mile trek to protest mountaintop removal mining and defend labor rights. Nearly 250 marchers and supporters of the Appalachia Rising March on Blair Mountain gathered at the Marmet Baseball Field for a rally on Monday morning. An hour later, shortly after 10 a.m., they headed toward Blair, a town near the Boone-Logan county border, where their march will end on Friday.

As the marchers began, several people driving through Marmet honked their horns in support of the marchers. Two small groups of counter-demonstrators held up signs including “Friends of Coal” and “I Love Coal.”

The marchers plan to walk the same route more than 10,000 coal miners took between Aug. 24 and Sept. 4, 1921, marching to Logan County to organize non-union miners.

The 1921 March on Blair Mountain was the biggest armed conflict in American labor history. After several days of battles, federal troops arrived and ended the conflict.

Find out how to join the march here