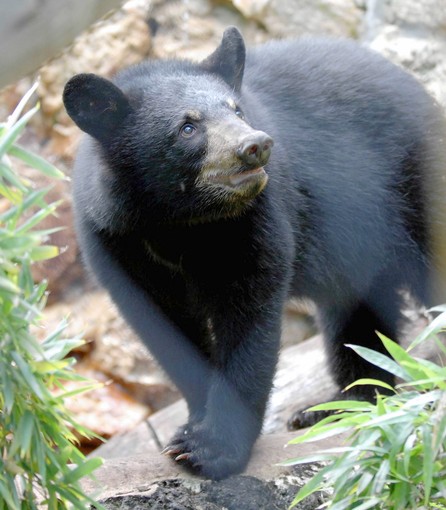 WEST PALM BEACH -- One of two orphaned Florida black bear cubs that are being raised at the Palm Beach Zoo at Dreher Park roams its enclosure Tuesday afternoon. The two sisters will live at the zoo for the next year when they will be transfered to a new exhibit at the Busch Wildlife Sanctuary in Jupiter. According to Keith Lovett, Director of Living Collections at the zoo, the cubs are from the Ocala area and were taken after their mother had to be put down by game officers after four relocation attempts failed. The mother bear became dangerous after taking her cubs into human areas and dumpster diving. Officials think the bear learned the practice after being fed by people. Photo by Mark Randall, Sun Sentinel

From an article by David Fleshler in yesterday’s Sun-Sentinel:  Florida wildlife managers insist bear hunting is not on the table, but the issue is likely to dominate the debate this week as they consider a massive overhaul of the state’s endangered species list.

“Florida’s blackbears have only recently begun to recover from near extinction, and they still face serious threats from habitat loss and fragmentation,” states an email alert sent out by the Humane Society of the United States. Removing them from the list “paves the way to re-open ‘trophy’ bear hunts, where hunters kill the creatures for hides or heads to display.”

Patricia Zick, spokeswoman for the commission, said hunting is not being considered. While it is one of many ideas mentioned in a draft, the agency this week will decide only whether to give initial approval to removing the bear and other species from the list. Then comes the drafting of final management plans, which must be completed before the agency takes final action.

Sixteen mammals, reptiles, fish and birds are up for removal from the list when the Florida Fish and Wildlife Conservation Commission meets Wednesday in St. Augustine. Among them are the black bear and several South Florida birds, including the brown pelican, snowy egret, limpkin and white ibis.

“For the birds, I think they pretty much got it right,” said Julie Wraithmell, director of wildlife conservation for Audubon of Florida.

But it’s not much assurance, being that Audubon of Florida also thought the bureaucrats “pretty much got it right” with their 2007 approvals of a massive FPL power plant 1000 feet from the Loxahatchee National Wildlife Rufuge, home to over 30 species of threatened and endangered species. With Audubon of Florida on board for another massive FPL fossil fuel power plant proposal in Hendry County on habitat for endangered black bears, and Governor Scott’s cabinet pushing a generally anti-environmental agenda, we’d be foolish not to question the intention of agencies and groups accepting a possible removal of the black bear, and other species, from the protection lists right now.