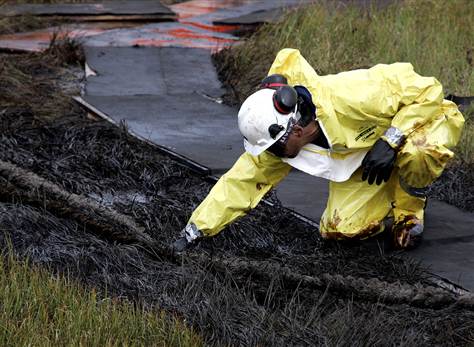 A worker uses a rope mop to clean up oil in tundra grass from a leak from an oil transit line at the Prudhoe Bay oil field on Alaska's North Slope on Aug. 10, 2006.

will pay $25 million in civil penalties to settle a federal lawsuit over 2006 crude oil spills from its North Slope pipelines.

Under the settlement, which also involves the U.S. Department of Justice and the Department of Transportation’s Pipeline and Hazardous Materials Safety Administration, BP Exploration Alaska, Inc. also agreed to implement a pipeline integrity management program throughout its system.

The penalty for the March and August 2006 spills, estimated at more than 5,000 barrels, is the largest to date for a spill on a per-barrel basis.

BP Alaska’s March 2006 spill was estimated at about 5,054 barrels, while the August spill was about 24 barrels. Federal investigators determined that BP Alaska failed to properly inspect and maintain the pipeline to prevent corrosion, and violated the Clean Air Act by improperly removing asbestos along the pipeline in the wake of the spill.

The pipeline management program required in the settlement will cost BP Alaska an estimated $60 million over three years, in addition to about $200 million the company has spent replacing the leaking North Slope pipelines.

Some $20.05 million of the penalty funds will be deposited in the Oil Spill Liability Trust Fund established under the Clean Water Act, which will be used to cover federal response to and pay compensation for future oil spills. The remaining $4.95 million will be paid to the U.S. Treasury.

In 2007, BP Alaska plead guilty to one misdemeanor violation of the Clean Water Act for the March 2006 spill, for which it was sentenced to three years of probation and ordered to pay a $20 million criminal penalty.