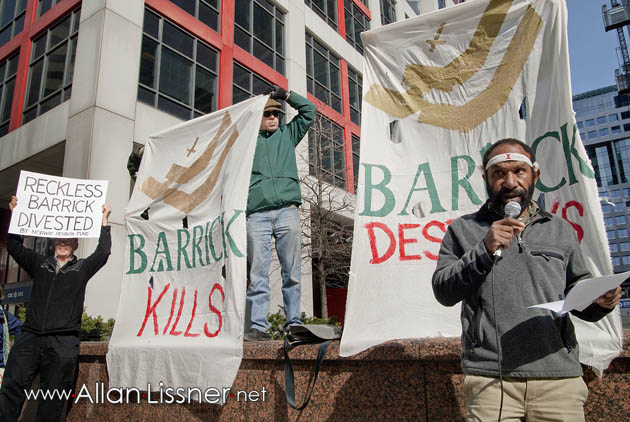 Indigenous representatives from Porgera, Papua New Guinea traveled to Canada this week to speak at Barrick Gold’s annual general meeting (AGM). This year marks the fourth year that the Porgerans have visited Barrick Gold’s AGM, each time raising serious human rights and food security issues. “We are attacked continuously and we are attacked often by a very noisy and very articulate opposition,” Peter Munk, Barrick Annual General Meeting, 2010 Jethro Tulin, Akali Tange Association a member of the Porgera Alliance said, “Since 2008 we have stood here at Barrick shareholder meetings and told them about the abuses our people suffer at the hands of Barrick’s security forces – beatings, shootings, rapes and gang rapes.” “At past AGM meetings, the board has assured the shareholders that our words were not true. But now, the world knows that there are serious abuses occurring at your Porgera Mine in PNG.” In 2011, due to pressure from an investigation by Human Rights Watch, Barrick finally allowed for an investigation of their security regarding the allegations of gang rapes. Five Barrick employees were fired, while eight former employees were implicated in the abuse. Barrick founder and Chairman, Peter Munk, was later quoted in the Globe and Mail saying “gang rape is a cultural habit” in the countries like Papua New Guinea, angering the Porgeran community and prompting the country’s Mining Minister, John Pundari, to demand a public apology. Instead of an apology, Barrick Gold’s Australia-Pacific President, Gary Halverson stated that Munk’s comments were taken out of context, lamenting that “only a small portion of this conversation was included” in the Globe and Mail article. The Porgera Alliance has since called for accountability in addition to backing the Mining Minister’s call for an apology. Similarly, a Amnesty International report released in 2010 showed evidence of at least 130 structures adjacent to Barrick’s Porgera mine were burned down, many of which were houses, while villagers were beaten, harassed, and detained. [youtube=http://www.youtube.com/watch?v=JHpTWbjiaRY&feature=player_embedded] Read the rest of the article at Intercontinental Cry]]>