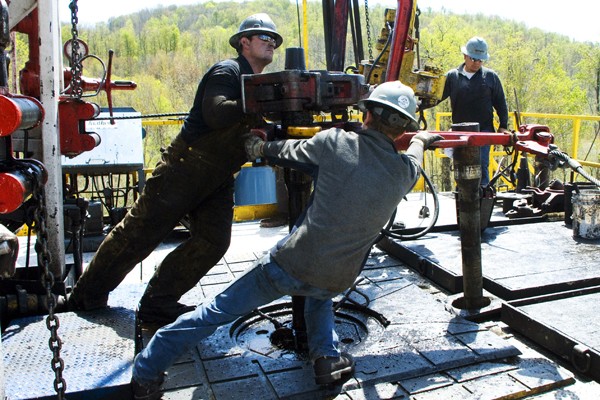 HARRISBURG, PA — Anti-drilling groups lack an official spot on the state’s Marcellus Shale Advisory Commission, but at Wednesday’s meeting, they found plenty of ways to make their presence known. As the panel focused its second full session on environmental effects from natural gas drilling, protesters rallied outside and repeatedly interrupted presentations to voice their concerns. With dozens signed up for the afternoon public comment period, the commission extended its meeting by more than an hour to accommodate the speakers. Many of the remarks were tinged with anger toward what they saw as a panel stacked with drilling executives, who they felt would protect businesses over public safety. “This is all about how do we make this better for the industry?” said Dana Dolney, of the Pittsburgh-based Marcellus Protest. “What about us? What about the people who are relying on you?” Lt. Gov. Jim Cawley, who leads the commission, listened and occasionally responded to the often-combative commenters. He later questioned whether “science and fact” back up some of the assertions, but said the panel was “sensitive” to the need to hear all sides. The commission, created by Gov. Tom Corbett in March, is in the process of gathering information on oversight and effects of shale drilling. The group of government, industry and environmental officials is tasked with recommending policy changes to the governor by late July. Some regulatory changes have been put in place as the panel continues its review. The Department of Environmental Protection called on drillers last week to voluntarily stop sending briny wastewater to sewage treatment plants. Several state environmental groups commended that action, which DEP Secretary Michael Krancer said Wednesday drew “compliance within 28 hours instead of 28 months.” But as the panel heard about a method for treating wastewater on-site, many of the protesters and commenters outside criticized the DEP for its softer approach. They argued that companies should have been told, not asked, how to handle the fluid used in hydraulic fracturing. “It’s not water — it’s toxic fluid that flows back!” shouted Conrad Volz, a professor from the University of Pittsburgh’s School of Public Health, during the noon rally outside the commission’s meeting. Read more: http://www.post-gazette.com/pg/11118/1142495-503.stm#ixzz1KouexgiV]]>
Posted in News.