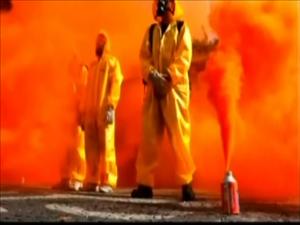 Rio De Janeiro, Brazil- Some are seeing red over a proposed nuclear power plant in Brazil. A dramatic protest included orangish red smoke and activists in hazmat suits. Environmental activists protest outside the headquarters of Brazil’s development bank to call on authorities to halt the construction of nuclear power plants in the South American country. Greenpeace activists protested against nuclear energy today outside Brazil’s state-run development bank, days after it announced it would finance the construction of a third nuclear plant in the country. Demonstrators wearing gas masks released orange smoke outside the BNDES bank’s headquarters in Rio de Janeiro to call for an end to Brazil’s nuclear plans. A series of similar protests have been held across the globe since Japan’s March 11 quake and tsunami triggered the world’s worst nuclear incident since Chernobyl. Brazil’s Congress last month voted to move ahead with the construction of its third nuclear reactor and BNDES announced a 3.9 billion U.S. dollar loan for the works. The Angra 3 nuclear plant would be built in the coastal resort area of Angra dos Reis between Rio de Janeiro and Sao Paulo and be completed by 2013. Greenpeace’s energy director, Ricardo Baitelo, said they want the government to gradually close the country’s nuclear power plants and cancel its plans of expanding the program. Officials said the Angra 3 approval could usher in a wider nuclear plan, which calls for between four and eight modern 1,000 MW reactors, to be built by 2030.]]>