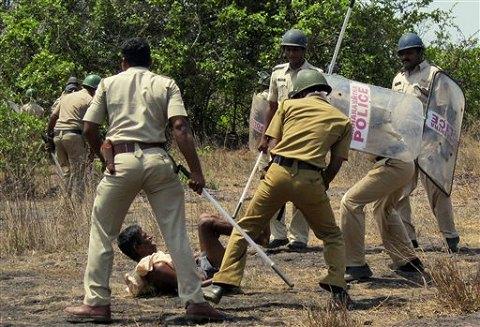 [/caption] By Kurt Achin | New Delhi cross posted from VOANews.com Protests at the site of a proposed nuclear plant in India are heating up well in advance of a mass rally scheduled there next week. There has been at least one death so far, and demonstrators say the government is ignoring their concerns about the threat the reactor poses to their safety and livelihoods. India’s Maharashtra state ordered an investigation Tuesday into the deadly shooting of a protester in the Indian city of Jaitapur. Police said they had “no option” but to fire live ammunition after protests against construction of a nuclear facility in the area turned violent. The deal to build the Jaitapur complex was signed with a French company during French President Nicholas Sarkozy’s visit in December. Indian officials say Jaitapur and 20 other nuclear facilities will generate one-fourth of India’s rapidly growing energy needs by 2050. Local residents are bitterly opposed, complaining the project would displace them from their land and disrupt traditional livelihoods like fishing. The recent disaster at Japan’s Fukushima reactor has fueled further opposition, with protesters claiming the coastal Jaitapur reactor is in an earthquake prone area, and may be just as susceptible to the forces of a tsunami. Read the rest of the story here.]]>