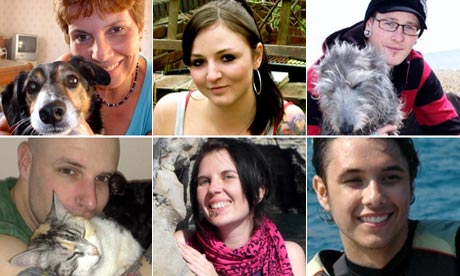 Amidst a stirring week of solidarity protests against animal cruelty, British courts jailed five animal rights activists today for “violence and terror” against Huntingdon Life Sciences.
The five activists work with Stop Huntingdon Animal Cruelty (SHAC), an organization dedicated to ending the sale and breeding of animals for systematic torture in the name of “science.” According to shac.net, “Huntingdon Life Sciences (HLS) are the largest contract testing laboratory in Europe. They have about 70,000 animals on site, including rabbits, cats, hamsters, dogs, guinea-pigs, birds and monkeys. These animals are destined to suffer and die in cruel, useless experiments… Taking action is coming on demonstrations, writing letters, making phone calls, sending emails or faxes, telling other people about the campaign, distributing leaflets, fundraising, putting up posters and stickers. Action is whatever you can do to close down the hell-hole that is Huntingdon Life Sciences. We all have our part to play and we can all take effective action to close HLS down.”
After a lengthy police investigation involving the equivalent of about $8 million dollars, Sarah Whitehead, Nicole Vosper, Thomas Harris, Jason Mullan and Nicola Tapping were given prison sentences of between 15 months and six years. Mullan, Tapping and Fitzpatrick all admitted conspiracy to harm HLS from 2005 to 2008 under the Serious Organised Crime and Police Act 2005 by interfering with companies supplying Huntingdon Life Sciences.
For the alleged crimes of mailing hoax bombs to homes and offices, making threats of violence, daubing abusive graffiti on property, and sending used tampons in the post, Whitehead has been jailed for six years, Harris for four years, Vosper for three and a half, Mullan to three years, Tapping to 15 months. Whitehead also received a 10-year Antisocial Behaviour Order banning her from taking part in animal rights activities. The others received five-year ASBOs on the same terms.
Alfie Fitzpatrick, the sixth and youngest member of the group of co-defendants, received a 12-month sentence suspended for two years.
This recent wave of repression is nothing new to SHAC. Seven SHAC activists (or SHACtivists) were imprisoned in the UK in January 2009—including its founders Avery and Nicholson, who received nine and eleven year sentences respectively—for allegedly blackmailing companies linked to HLS, and in the US, six members of SHAC were imprisoned for up to six years for nothing more than running a website.
Still, SHAC maintains its international network of activists who came out in force this week to drop banners, stage protests and express their dissent against an industry that subjects the wild to its sadistic urge to torture and kill. This week’s “Scary Science Solidarity” actions include a banner drop at the home of an executive officer of US NOMURA, SHAC financier; home demonstrations against a big Fortress shareholder and HLS customer, as well as a protest at the UK Embassy in Washington DC; a protest outside of HLS in Suffolk, and more protests in London among other places.