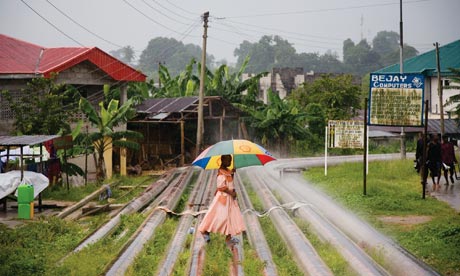 A protest of Nigerian women shut down a Shell plant just one week after a group of Ugborodo women blockaded a Chevron natural gas pipeline. Last Sunday, the UN released a report largely exonerating Big Oil from damage done in the region, claiming that 90% of the environmental devastation is brought on by small, independent “bunkerers.” The Niger Delta has 606, which supply 8.2% of all US crude oil imports. There have been 300 major oil spills in the region, pouring about 8 million barrels of oil into the once lush area. Over the last two generations, life expectancy in rural communities has fallen to around 40 years old.
Militant responses to the environmental catastrophe in the Niger Delta have taken the form of the potent Movement for the Emancipation of the Niger Delta (MEND), which has carried out a spate of carbombings, pipeline sabotages, kidnappings and threats against Big Oil and corrupt politicians. MEND signed an amnesty with the government of Nigeria only months ago in attempts to come to terms on problems concerning the Niger Delta, but peace has been tentative. Today, however, a great blow was dealt to the peace process and the healing of the region, when former MEND commander, Soboma George, was gunned down in an ambush by unknown assailants. Soboma had been playing soccer, and was on his way out of the field around Nembe street, town Area, Port Harcourt, Rivers State when four men in French suits got out of their Corolla and approached him. Unsuspecting Soboma refused to be intimidated, and the gunmen opened fire at close range with automatic weapons concealed in their clothes. The gunmen fled, leaving Soboma and two women to die in the street. In other news, activists protesting the expansion of I-5 in Solana Beach protested outside of a public meeting of the California Department of Tranportation, expressing their concerns with facilitating more traffic around LA instead of providing better public transportation.

The so-called Climate9 who chained themselves to a cage on a tarmac runway of the Aberdeen Airport last year have each been fined around $1,000 for breach of peace. The activists are with the organization, PLANE STUPID, which promotes direct action responses to increased airplane traffic and expanded airports. One of the trial’s expert witnesses Dr Geoff Meaden said: “Society’s problem is that, other than through civil disobedience, there are often no legitimate means of getting governments (at any level) to ‘act correctly’ or to act in the best long term interests of people, environments or indeed the planet. In the absence of such a ‘jury’ or ‘commission’, then we have to be glad that there are groups such as Climate9 who are bold enough to bring to the public’s attention existing injustices.” 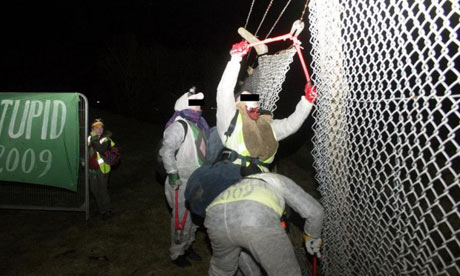 Environmental protests are also targeting the University of Texas today for their construction of new H20RANGE water bottles made in the shape of the UT tower. Activists claim that the bottles damage the City of Austin’s “zero waste” goals.