In an update three days ago from the last remaining tree-sit in the US, “Forest Defense activists erected two [new] tree-sits last night. Green Diamond is planning to clear-cut this now-occupied area of second-growth Redwoods, with individuals in the stand up to 150 years old. The THP (01-08-145) is on the Jacoby Creek watershed, an area in which salmon still come to spawn, and has been devastated by rampant clear-cutting in past years. Green Diamond has been informed of the occupation this morning, and company employees have yet to appear on the site. Tree-sitters say all is running smoothly at the moment.”
We received reports yesterday that “GD loggers are cutting trees next to a tree sitter in Jacoby Creek.” Although we are uncertain what will come of this, loggers are known to get out of control when frustrated. It is not uncommon for them to jeopardize human life, and several people have been injured by their whim and caprice. Please contact EF! Humboldt to learn how you can help: {707} 834-5170 or contactefhum@gmail.com 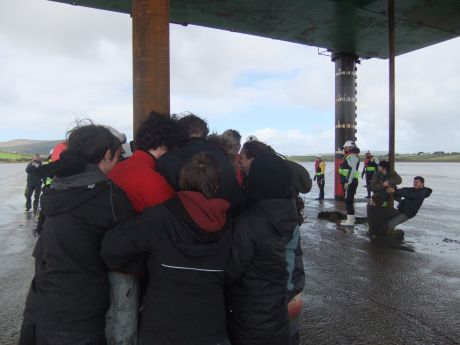 The EF! ‘Beat the Boreholes’ effort by Shell to Sea and the Rossport Solidarity Camp, aimed at getting in the way of Shell drilling boreholes in the Sruwaddacon estuary which is a Special Area of Conservation Shell’s Survey work, continued this week to great affect. A drilling rig was shut down for 3 hours by activists who occupied the area underneath the rig, forming a giant and unmovable cuddle-puddle. Read more about it here. Overall spirits were high, and about forty campaigners remained either under or around the outside of the platform for the duration of the action. Once the tide came in people were satisfied at having stopped work for three hours, and the campaigners left Shell to continue their dirty work in the beautiful Sruwaddacon estuary. 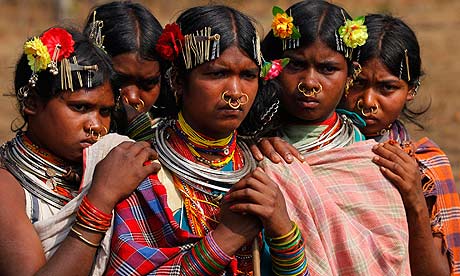 Vedanta Resources’ proposed bauxite mine in Orissa, India has been cancelled by the government, to the elation of indigenous peoples and environmentalists who have been struggling against the plans for years. The mine would have destroyed ceremonial indigenous lands as well as the bioregional integrity of the area. Monty Python star, Michael Palin, who has taken part in this extended struggle, declared, “”I hope [the decision] will send a signal to the big corporations that they can never assume that might is right. It’s a big victory for the little people.” Survival International supporters sent more than 10,000 letters to the Indian government protesting Vedanta’s mine, as local organizers in India received threats and harassment from police agencies. Exposing the divisiveness of this issue, police placed 100 workers and Vedanta supporters into preventative arrest in Lanjigarh in Kalahandi district today for attempting to conduct a procession against the ruling. Hundreds of BJD workers also led a procession through Bhubaneswar to the same effect.
Activists are currently moving to have Vedanta close its existing refinery in the same region. Lingaraj Nayak, an activist of the Niyamgiri Surakhya Samiti (Niyamgiri Protection Committee), explained,
“Tuesday’s verdict is a partial victory for us, not total victory. As long as Vedanta’s factory is present, there’s always a chance that some other minister may come along and allow mining in Niyamgiri Hills. The refinery needs to go to ensure the hills remain untouched.””

In other news, direct action resistance has been growing against border militarization in Arizona and around the USA. Earlier this month, activists in New York City protested the environmental think tank, The Weeden Foundation (check their websight here), for funding the anti-immigrant movement. Over 100 community members from the Bronx protested in front of Weeden’s Manhattan headquarters with the Northwest Bronx Community & Clergy Coalition (NWBCCC) and Sistas and Brothas United (SBU). According to the press statement, “Weeden has a history of attempting to inject anti-immigrant agendas into the environmental movement, and also supporting anti-immigrant hate groups…As representatives of diverse immigrant communities, Northwest Bronx community members instead call for an immigration reform that provides all immigrants with full civil rights and a humane pathway to legalization, and an end to racial profiling, raids, mass detentions, deportations, and government programs that criminalize immigrants.”
The Weeden Foundation was featured in a report released by the Center for New Community just last
week. The report outlined how anti-immigrant groups have corrupted the dialogue on population and the environment over the last 14 years. For more, click here and here. See Apply the Brakes by Chicago-based Center for New Community for more information on the connection between certain fake-environmentalists and anti-immigration.
Meanwhile, direct action has been taken in support of immigrants, striking at the route cause of environmental and human destruction. Late last month, anonymous comrades threw tar, glass and tires on Highway 19, the same route used to deport immigrants, in order to stop business as usual in the infrastructure of colonization and greed. Claiming responsibility for the action, the group Freedom for Arizona explained, “U.S. economic policies and wars have displaced and impoverished millions of people all over the world. Capital-driven policies, such as NAFTA, create poverty. These policies and laws not only consume and exploit land and people, but they also displace us from our homes, forcing us to migrate in order to survive.” Other protesters blocked downtown streets in protest of the exploitative trafficking of human bodies over the border and back through the complicit relationship of militarization and free trade policies. 13 were arrested.
A new zine has been released on environmental and indigenous action in Arizona called Stronghold. See Survival Solidarity for more.