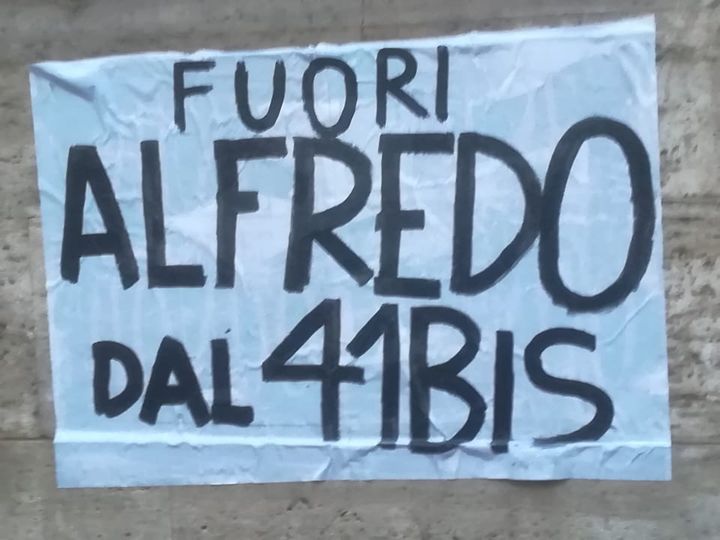 On January 5th, the 78th day of the hunger strike to the bitter end against 41 bis prison regime and life imprisonment without possibility of parole, the antagonist radio station Radio Onda d’Urto broadcast a second speech by the doctor who is regularly visiting anarchist comrade Alfredo Cospito, imprisoned in the Bancali prison, in Sassari. As for the update on the 71st day of the hunger strike (December 29th), we report a transcript of the speech and the recording of the broadcast (in italian language):

“[…] All in all, Alfredo’s condition is good. He is holding the hunger strike in an unexpected way, perhaps because he started from a high weight, at the beginning he weighed 115 kg, while today he is 2 kg under the last time I saw him, so we are talking about 83.5 kg. All in all, he is absolutely lucid, well oriented in time and space, he only reports some pressure drops, especially when he gets up, and this is there because he is maintaining a slightly low pressure; however, not particularly, today he had a maximum of 105, a minimum of 70, so all in all a good pressure. With regard to the haemato-chemical examinations – the last of which have not yet arrived – the situation from the penultimate ones was stationary like the previous ones, so there is a slight drop in the white blood cells, but as for the rest […] the vital parameters are good. As far as potassium is concerned, I can’t tell you anything, because, as I told you in the last interview, the potassium was a bit low, but it seems – from the electrocardiogram where you can indirectly see a possible drop in potassium – that there are no longer those typical alterations from hypo-potassiemia. He’s been taking honey from time to time, and this is also doing him good with regard to a sort of cheilosis he had on his tongue, with patina, etc.; basically, honey is a natural antibiotic. Today I brought him some curaseptic, which is a very disinfectant mouthwash […], the prison guards didn’t want to, then I managed to get him to rinse, and that made him feel good; then he used this ‘brush’ that I also brought him to remove the plaque from his tongue, and all in all he was very happy with how it felt, how his mouth felt. So basically the situation is stationary […]”.

We also report the latest updates on the condition and health of the comrade:

While regarding the health condition of comrade Ivan Alocco, imprisoned in France and again on hunger strike (starting from December 22) alongside Alfredo, we invite to read the latest update:

[Published in italian at https://lanemesi.noblogs.org/post/2023/01/09/aggiornamento-sulle-condizioni-di-salute-di-alfredo-cospito-al-78esimo-giorno-di-sciopero-della-fame-ad-oltranza-5-gennaio-2023/ | English translation published at https://lanemesi.noblogs.org/post/2023/01/09/update-about-the-health-condition-of-alfredo-cospito-on-the-78th-day-of-hunger-strike-italy-january-5-2023/]

Posted in Anarchist Movement, Europe, Fire to the Prisons, News.